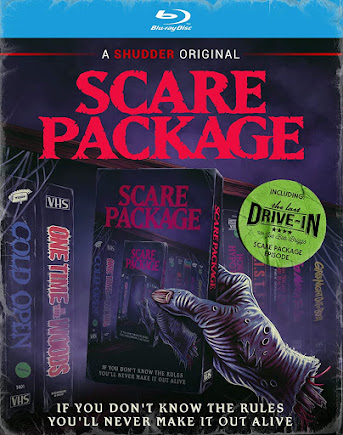 Scare Package reminds me a lot of the member berries from the series South Park. Member Halloween? I member. Member the Freddy car from Nightmare on Elm Street? I member. Member Joe Bob Briggs? I member. You get the picture. Scare Package is a collection of different horror stories all framed around a horror film obsessed video store clerk and his new employee. The key take away from Scare Package is sometimes less is more. Just because you can blend in every '80's horror reference into a hyper self-aware smoothie doesn't mean you should. The major factor of enjoying Scare Package comes down to two questions: Do you like meta jokes? And I mean LOTS and LOTS of them. Do you like movie references, and not subtle ones but like name checking horror movies and also throwing a thousand lampshades on everything. If you do, you will most likely love this movie. If, you like me, feel like the Meta-horror genre is over-done not to mention a lazy writing device that isn't nearly as clever as the writers thinks it is, you my friend are in for a long hard ride. The movie even lampshades the over-used Meta-troupes fairly early in the film, which I STRESS isn't the same as being clever about it. I repeat acknowledging the shitty Meta jokes isn't the same as subverting them.  I truly think that in small doses I could have let this slide but it just hammers the point in just about every minute of the run-time.
So, I had been warned by other reviews that this film lends more on the comedy side of horror, which for me personally isn't a deal breaker. In fact, its tricky but horror and comedy can be a perfect marriage. For example, 2010's Tucker and Dale Vs Evil is a brilliant film because it subverts and deconstructs the slasher genre without relying on name-checking movies, overt references and of course fourth-wall jokes. And, its a laugh-riot with stellar performances. That film works as well as it does because it can do this kind of self-reference genre troupes but it still feels very much its own movie with its own fresh voice. Scare Package never feels like it stands on its own feet or has anything super original to say.

The segments within the framing device are really something. They all take fairly big swings, some range from "Oh, that was at-least interesting" to, "Um. What?" Again, I hate to be a buzz kill but all of the stories, even the more solid entries feel like they could have used more polish writing wise. Some have fun and even interesting concepts that just miss the mark. Lets take MISTER for example. I loved the idea of mixing toxic manhood and the supposed "alpha status" with werewolves but, again the themes are never taken far enough to be interesting or memorable. The chocolate bar gag was pretty clever, I will give them that. Probably my favorite segment was So Much to Do written, directed and starring Baron Vaughn. This is a good seg-way into what I think works about the film, because I honestly do not get enjoyment crapping on a film, especially one clearly made by fellow horror fans. As I said the film is probably more comedy than it is horror, and, I admit there are some pretty funny jokes and gags sprinkled throughout. Damned if i didnt get at least some chuckles here and there. Now onto what I think this film really has going for it, the effects. Wow. The filmmakers really celebrate the art of practical movie magic and, that love is strong. Goopy, gloopy, messy and gallons of blood, this is a gore hounds wet dream. And, despite the flaws, each segment has a high energy feel and I dont get the sense that the filmmakers are simply phoning it in. Truly these filmmakers took their love of video renting, 80's horror and over-the-top comedy and stitched together an anthology.
This is all we and good but it comes down to this:  the film is wildly unfocused feels the need to bash us over the head with its influences. And at just shy of an hour and fifty minutes it over stays its welcome. The final wrap around segment for example just goes on for an absurd amount of time and starts to get very indulgent and frankly boring.  Look, I'm all for fun even outrageous cinema but you need a skill set to pull it off. Its not to suggest the film is devoid of talent, far from it, it just tries way too hard and comes off annoying and shallow.
Scare Package begs the question is Meta horror over done? For every New Nightmare (1994), Scream (1996) and Cabin in the Woods (2011) that uses skilled writing to take apart the horror genre, filmmaking troupes and clichés and cleverly re assemble them into something exciting Scare Package does not. Again, my problem isn't with the heart and passion or the effects but with how much the film falls back on the same joke over and over. Its like References: The Movie. Some people love this movie and hey, more power to you. I was that '90's kid that always had an fistful of video tapes from my local mom and pop and I like to think I am extremely knowledgeable when it comes to films in general especially horror.  I have seen literally thousands of them from all over the globe. I dont say this as a brag but to say I am certainly this films target audience but it failed to connect with me. Even the nostalgia for mom and pop rentals and Joe Bob (his cameo is epic btw) wasn't enough to make this an enjoyable movie. Call me a grump but this is the best example of how not to do Meta-Horror.
Picture: Scare Package looks great on 1080p and for being shot on digital has a nice grainy film like quality. Colors are lush, warm and really pop. Skin tones are well balanced and look natural. This transfer really shows off the big bold colors the film uses as well as the great gore effects.
Sound: Scare Package sports a nice DTS 5.1 Soundtrack. I really think its impressive. It's not as complex as it could be but the music, dialogue and sound design come through nicely.
Extras: Scare Package has a decent array of extras including a bonus segment Locker Room Z (8mins), Rad Chads Ad (1min) a spoof commercial for Rad Chad's the fictional rental store. The Scare Package Blooper Reel (5mins) a pretty funny blooper reel. Anybody who knows me, knows I am a sucker for blooper reels. the aptly titled Original Not As-Good Ending (1min) Producer Commentary track and maybe the best feature the entire Joe Bob Briggs Episode that Features Scare Package (2hrs 23mins)_.
Posted by The Video Attic at 7:51 AM