Save Yourselves (2020) Film Review 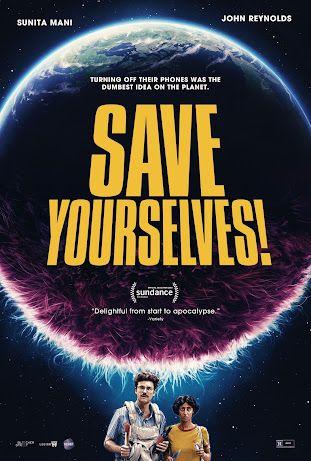 Save Yourselves! is a rare screener that wasn't gross-out or bleak, thus I actually got my boyfriend to watch with me. By the end of the film we both were howling with laughter.  Even though both Alex Huston and Eleanor Wilson make their directorial debut they feel like old pro's at the medium and its a pleasure to see them flex their creative muscles with skilled camera work, lighting, tight direction and a bloody brilliant screenplay. Taking a genre film like horror or sci-fi and blending it with comedy isn't exactly an easy thing to do. Thankfully though, Alex and Eleanor do a very good job at not only marrying the two genres in an organic way but also are able to maintain  a consistent tone. Even when the stakes get raised the film always feels fun and enjoyable which is a hard thing to do, let alone do well. While I'll get more into the actors, for now I'll just say that  John Reynolds and Sunita Mani are more than up to the task to keep the mood on track. 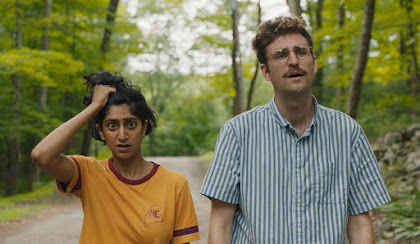 It's very clear the filmmakers took a lot of wicked glee in satirizing other alien invasion movies/creature feature films of a bygone era and the poufs are a brilliant and funny subversion of the 'look how scary/intense the alien is' troupe. Because, seriously, the xenomorph design set an impossibly high bar. The look of the aliens and the tone also harkens back to Critters (1986), which itself was of a satire of sorts.  Seeing how the film is largely only populated by Jack and Su the movie hinges on them. It's a gamble that pays off extremely well as the two actors are perfection! John Reynolds (Search Party, Stranger Things) and Sunita Mani (GLOW, Mr. Robot) really make the already clever script shine and their off-beat characters are likable enough to want to spend the bulk of the movie with. Both John and Suni not only thrive on their own merits but play off each other nicely. The film also has great supporting actors like Ben Sinclair (High Maintenance) John Early (Search Party) and Amy Sedaris (Strangers with Candy, At Home with Amy Sedaris) making a hilarious cameo. Outside of it's technical polish, what makes Save Yourselves have staying power is how a lot of audience members will be able to identify with its leads.  When you boil it down, the film is about people stuck in a rut and, there is something so relatable to characters that are in the thirties that are clearly, like myself, still trying to understand and  navigate a strange world but also searching for a place in it. Now throw these same characters into a literal world-ending situation and that's a damn great premise to hang your film on.

Alex and Eleanor boldly ask themselves, What if H.G Wells  War of the Worlds was viewed by two Brooklyn thirty-sometimes? The end result is a film filled to the brim with razor sharp wit that crackles with great comedy dialogue and painfully relatable/funny moments.

Charming, extremely well acted and funny as hell, Save Yourselves! is the real deal. P.S: pouf on the roof will always be funny in my opinion.  Check out this film! October 6th on VOD and Blu Ray!