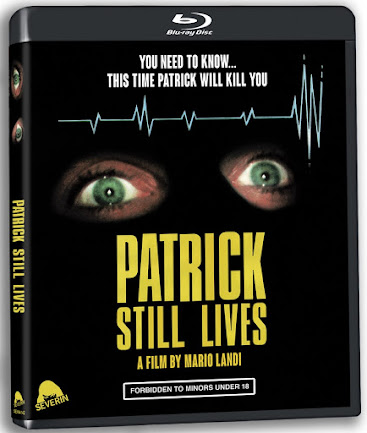 1980's Patrick Still Lives is a pretty infamous Italian film that acts as an unauthorized sequel to the bonkers Ozsplotation flick Patrick (1978), directed by the legendary Richard Franklin (Psycho II, Road Games). FYI If you haven't seen Patrick, its a must see, and its also released through Severin. Because of it's being a shall we say, not totally official sequel the North American rights have been dicey, with hardcore trash fans needing to resort to bootleg copies. But fans rejoice, just like Cruel Jaws (1995) last month, Severin has done the seemingly impossible, bringing this back to fans in an official version. A bed bound Patrick (Gianni Del) uses his physic powers to seek a bloody revenge in this ultra low budget shocker.

Patrick Still Lives may lack a compelling plot or richly drawn characters or hell, even basic logic but really, you didn't come into this thinking it was going to be a masterpiece. What the film does deliver is a nutty '80's Italian outing that proudly carries that mantle and includes: weird dialogue, sketchy at best characters and motivations, lots of nudity, outrageous gore and sleaze by the buckets full. This is certainly not what I would call a good movie but its so crazy and graphic in every sense of the word that you cannot help be transfixed. It weirdly fuses the Old Dark House thriller with the slasher genre all wrapped up in a physic psychedelic package.  The movie is so beautifully shameless in not only ripping off Franklins film but also in how eagerly its willing to get good and nasty. Speaking of which, the film even manages to have a death scene (in a very sensitive area) that, as jaded as I am couldn't help but me a bit taken back. Visually the film has this really off-beat surreal look with neon lighting inspired by Bava and later Dario Argento. I went into this film expecting a pretty low-level sleaze fest and I was not disappointed. It delivers on cheap thrills and is somehow always ramping up the insanity. If you only see one sexed up physic slasher Patrick Still Lives is it!

Picture: The title card before the movie reads: The following scan of PATRICK STILL LIVES is from the original 16mm camera negative. There is some discoloration in some scenes due to damage in the elements but this will hopefully not mar your enjoyment of this audacious filmic experience.

Honestly, its a small miracle that this film is in such good shape considering it languished in near obscurity for decades. Overall, Severin offers a very nice sharp print and most certainly the best the film is likely to ever look. Image is clear with colors really popping. Seriously I think even the discoloration that they mention is not that distracting and, real talk I'm just grateful that a useable negative was even available. As always Severin does an excellent job at rescuing an obscure gem and scrubbing it up.

Sound: Patrick Still Lives sports a nicely done DTS 2.0 track. Dialogue comes through clear and for a 2.0 the sound is robust and does the job nicely.