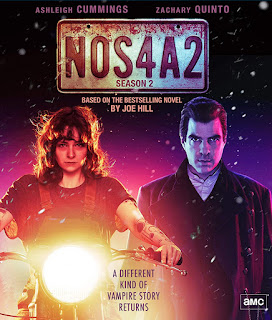 Disclaimer: RLJE has provided me with a copy of this set free of charge for the purposes of review. All opinions contained within are my honest reflections.

Just in time for Halloween comes the complete second season of the hit show based on the best selling book by Joe Hill. NOS4A2 Season two is one of those rare times when I feel the first season is good but the second season is better. I think the biggest improvement is how the showrunners explore much more of Manx background. And of course you can get right into plot without having to spend a lot of time setting up characters etc. Just like season one the series does a nice job of scares and really nice production design that engrosses you into the entire affair. Some people find some story elements dull and while thats not entirely untrue the the dazzling acting and set pieces kept me invested as the season went on and as far as story goes, its good, not brilliant. I really like the interesting take on vampires  that the series nicely hangs its hat on. It's really difficult for me to go into more detail as I dont want to spoil things if you haven't seen both season one and or two. I will just say its a show that has had its share of mixed reviews but for my money its an engaging horror tale told with fantastic actors, a rich and detailed production design and some nice twists and turns.

Picture: NOS4A2 is a series that truly sings on 1080p. Colors are vivid and the details in the production really stand out in this transfer. Skin tones have a nice well balanced and nature look overall. Outdoor scenes are really stunning looking as well. Overall this is a nice looking Blu-Ray.

Extras: NOS4A2 has a nice array of extras included in this set. A Look at Season 2 (4mins) A nice featurette with the cast and crew discussing the events of season one the themes and the jump in time between season one and season two. Really interesting short feature that is worth checking out.

Catching Up with the Characters (5mins) A short look at the characters of season two and its impact on this second season.

Comic Con@ Home Panel (37min) A remotely recorded panel. Its a great lively panel done during the COVID pandemic featuring Joe Hill, Jami O'Brien, Zachary Quinto. They discuss this season, some plot elements (which I wont mention bc of spoilers) and some really interesting tid bits like the differences between the Hills book and the series.

Overall: NOS4A2 is a series that people takes a little while to get fully invested into but by the time season two I really found myself enjoying it. The episodes themselves look great and has some nice features for fans to pour over.