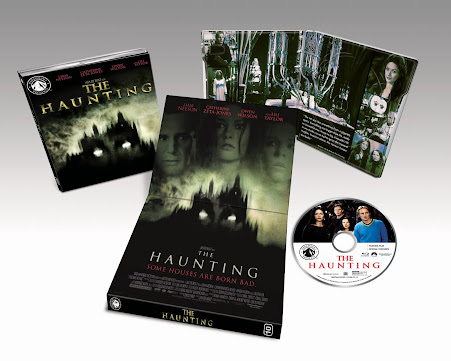 The Haunting (1999) is a film that was hated by critics because it failed to capture the magic of the original 1963 Robert Wise classic. It's been over twenty-years since its release (I haven't seen it since) and, its October so I think it's a perfect time to re-visit this film and ask, is it really that bad?  The film centers around a group of people are talked into joining a sleep-study, only to find out its to research the supernatural happenings at Hill House. '99's Haunting will always live in the very large shadow of the 1963 version which is considered by most to be the greatest haunted house movie ever put to film. The film was savaged by critics with, ironically Robert Ebert being among the few to give it a positive review. Despite this the film made 180 million on a 80 million dollar budget. Haunting starts off with a promising first act that gets right into developing characters and setting up the lore of Hill House. It's also within the first 30 minutes that director Jan de Bont along with cinematographer Karl Walter Lindenlaub (Stargate, Independence Day) get to flex their creative with a beautifully Neo-Gothic haunted house far removed from late '90's culture. It's worth noting just how crazy detailed the Crane Mansion is and I think that critics even at the time remarked that the film is visually stunning. Also on the plus side the '90's version is allowed to explore Theo's bisexuality, something only strong coded in the Wise version. And, honestly I like Theo way more interesting as a character in the updated version, she is tough, hard but also has a soft side that makes her more developed. And, with a bigger budget the house is actually is a living breathing character with some very nice set-pieces. And while yes the CGI hasn't aged well its not all bad, plus they mix some really nice practical effects that fit nicely. And the cast...Okay, so I love Lili Taylor who I think is probably the best thing about this film outside of its amazing production design and atmosphere. Everybody else with the exception of Bruce Dern's small cameo, is wildly inconsistent to wooden or all over the place. And elephant in the room Owen Wilson is so utterly bad in this and I think he clearly was acting in a different film than everybody else. This is why I think Wilson works best in comedy.

Here's the thing: I dont think The Haunting is a terrible movie, it just over explains when it really doesnt have to. The bigger budget allows for some great visuals but also I feel it loses what made the original so provocative, in how subtle and effective the scares were, a less is more kind of way. Wise knew it was more about sound design, atmosphere and perfectly timed scares. Add in some...shall we say questionable acting and some bad CGI (though as I said some of its actually not bad) and it doesn't help its case. I will give the film a lot of credit for trying to do something different with the source and also by trying its hardest to get out from under the originals shadow. It doesn't work completely but I still found it enjoyable anyways. Because Jan de Bont swings big and I'd take that over bland any day. Not a great film but also not the dog everybody claims it is. A three star movie which is good enough sometimes.

Picture: Holy smokes, Paramount has once again provided film fans with a transfer that is sublime. The film was shot on 35mm with digital effects added in, and remastered in 4k under the directors supervision. As I said the strongest thing Haunting has going for it is its visual look and gorgeous complex production design. This new transfer is crisp, clear and truly celebrates the rich atmosphere and incredible attention to detail. There is very little film grain and what grain is present is so fine an consistent that it's hard to see it unless your looking for it. I have to say this might be the best looking late '90's from upgraded to HD I've seen thus far. It really is well done and Paramount and crew should be very proud.

Sound: Equally impressive is the sound. Haunting sports a DTS 5.1 and has a complex layered sound that is very nearly ATMOS level in my opinion. You really get a big boom from the robust sound design that dominates this film.

Behind the Scenes Featurette (27mins) This wonderfully vintage featurette, hosted by Zeta Jones, is actually a pretty lengthy and in depth look at the behind the scenes with some great interviews.

New to edition is Filmmaker Focus (9mins) Filmed by Justin Beahm this brand new interview is wonderful and features some great behind the scenes footage. Jan explains his process with the film and he gives a lively and interesting interview. Props to him Beahm for going the extra mile with this feature.