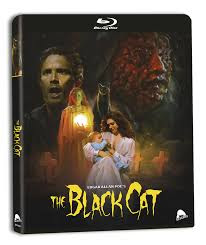 1989's Italian film The Black Cat marks the second film Severin released of director Luigi Cozzi, his first being Paganini Horror (1989), which was released last Oct. A writer/director duo is crafting a new horror movie about an ancient witch named Levana. It seems that Levana isn't happy about having a movie made about her and starts to reek havoc.

Luigi Cozzi's The Black Cat (1989) starts off  oddly enough in weird space with what looks like a dime store space baby from Kubrick's 2001 and then brings us crashing back to earth with some in your face 80's hair rock licks. I knew I was in for a wild ride but I had no idea.  The Black Cat is the perfect test if you enjoy bonkers Italian trash or, if you have boring taste and do not. I say this because this late '80's outing is like a sweaty fever dream where logic is thrown out the window and, just when you kind of sort of think you know what's going on another crazy curve ball is thrown your way. The film is pretty interesting in the way it acts as a semi-Meta commentary on Italian genre and even name checks Suspiria (and using bits of Goblin's famous score) as well as Dario Argento himself. Sadly, the film doesn't really double down on this Meta angle and even seems to abandon it halfway through.

Thats OK because the movie is anything but boring and, I cannot stress just how totally insane this movie is. Cozzi conjures  some great surreal imagery, gross out gags and wonderfully over-the-top moments and set pieces. Visually the film is outstanding and is over-flowing with strange camera angles, vivid atmospheric colors and mood pieces that are no doubt inspired by the likes of his peers Bava and Argento. The best way to even begin to describe this movie is like an acid-laced Lovecraft Cosmic horror epic blended with grimy late '80's Italian trash and sprinkled with a dash of Meta film commentary. And, honestly as hard as I try that still doesn't do justice to how crazy this movie is. The Black Cat  may just give 1979's The Visitor a run for its money in terms of brain melting insanity. I will most certainly be re-visiting this one, and, despite it not being on your radar is very much worth blind buying!

Picture: Severin has done a fine 2k transfer to 1080p. The image is crisp, clear with no artifacts or scratches. Colors really pop and do justice to the visual style that Cozzi brings to the table. I was impressed by how smooth the images looked without any blurring that I could see.

Sound:  Black Cat has a nice DTS 2.0 track. Dialogue and sound design comes through crystal clear with no hiss or drop out audio.

Extras: The extras include Cat on the Brain (9mins) Interview with Luigi Cozzi and Caroline Munro. This new interview is really informative and Cozzi and Munro make for fun and lively subjects. I can say from personal experience Caroline is a truly special, kind person to her fans and I loved seeing her discuss this role.