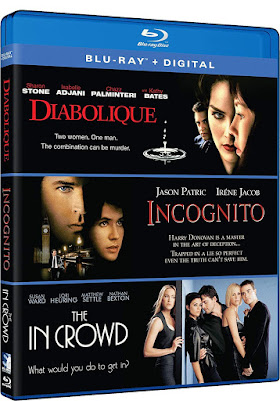 Here's the thing: If your going to remake a watershed movie like Diabolique (1955) a movie that is legendary in the thriller genre, you better bring your A-game. Sadly, Jeremiah Chechik's attempt at remaking it falls flat. On paper America seemed primed for this remake, as Fatal Attraction (1987)  and Basic Instinct (1992)  steamed up the box office with sex and murder. So it makes sense you`d do a movie like Diabolique and hiring Sharon Stone seems like a sure bet since, hey she was in Basic Instinct and a very in-demand actor. The problem is the film has the sex appeal of rotten eggs and is a dud in the tension department as well. The thing is Jeremiah Chechik is a director that lacks any real visual punch, but is still very workmen like. This is why he's not really a household name despite directing cult classics like Benny and Joon (1993) & National Lampoon's Christmas Vacation (1989). In a nutshell I dont think he really understood what made the original film so effective. I was kind of shocked to learn that screenwriter Don Roos previously worked on 1992's Single White Female, a simple but highly effective thriller. Again, Roos seems to know the right pieces to this puzzle but the film is bogged down terrible dialogue and and a narrative that lacks the complexity and haunting nature of the original. It also feels needlessly long at nearly two hours.  People have piled on with Stone being bad in this and while she is by no means amazing I think it's unfair to put the blame on her as its hard to make some of this tin-pan sound realistic. Speaking of actors its jarring as hell to see J.J Abrams playing essentially a director. This movie lacks the flare and unnerving quality of the original and and it sputters out with a whimper.

Picture: Mill Creek Entertainment has been doing a good job at sourcing its transfers. Diabolique was shot on 35mm and upconverted to 1080p. So if you know anything about transferring older movies onto 1080p you`ll know that 35mm films will have a lot of grain. That's not a bad per say and in this case its consistent throughout. The film has a pretty muted palate for the most part so I think the upconvert does what it can to enhance the color. Details aren't as sharp or defined with some blurring issues, but, overall its a serviceable picture.

Sound: Diabolique has a DTS 2.0 Mono track. Nothing that will blow you away but it, like the picture is very serviceable with dialogue and sound design coming through well.

Harry Donovan is an expert painter, but since Donovan is virtually unknown in the art world he forges famous works of art for high prices. Desperate for cash he excepts a job painting a lost Rembrandt going to insane lengths to make it as real as possible. It seems the artist cannot trust the shady business man and is double crossed. Now on trial Harry must prove he painted the work of art and not the famed Dutch master.   1997's Incognito is probably a movie that you likely never heard of, and I include myself in that statement. Director John Badham best known for cult films like WarGames (1983), Short Circuit (1986) tries incredible hard to channel Hitchcock in this thriller. While its no Hitchcock and suffers form a somewhat underwhelming screenplay I still had a lot of fun watching this one. Its a fairly breezy, international jaunt and while I think Jason Patric is miscast he still carries the mantle of leading man well. It's a thriller that is well directed and though it suffers from polish in its screenplay, you cannot help but still be entertained as the plot unfolds at a nice pace with a few good twists to be had.

Picture: Like the other films Incognito seems to be sourced from a really nice print. Grain is consistent and fine with very little in the way of blurring. Outdoor and on locale scenes really pop with vivid colors. Overall a nice looking film.

Sound: Incognito has a DTS 2.0 Mono track. Dialogue comes through clear and no distortion to be found.

Horror fans will likely know Mary Lambert's work as director on what is still in my opinion the best adaptation of Pet Semetery from 1989. And while she still work,  mostly in television she will probably forever known for that movie. A woman is recently released from a mental health facility and gets a job at a posh country club. She slowly starts to inject herself into a clique of rich spoiled kids by any means. The In Crowd has a 2% on RT and tanked at the box office barely making half of its 13 million dollar budget. Lambert does what she can to make this film work but clearly this film is saddled with a not even half baked screenplay by two screenwriters that are woefully out of their depths here. The plot never seems to come together, the characters are are stock as if you ordered them out of a catalog and the thrills are weak as hell. The actors are actually not bad especially considering the wooden dialogue they are forced with. Sadly it seems that the budget wasn't spent on any big name actors that may have helped smooth over the films tedious nature of the plot. What saves this movie I think is how its so earnest in its own serious nature that it crosses into that sweet spot of so bad its enjoyable, enjoyable might be strong, lets say it makes its watchable. This movie has a cool set-up and I think it could have been rift with thrills, chills sex and revenge. Sadly though, while Lambert's direction is workmen-like it suffers from a incredible weak screenplay by two writers that seems like they could barely craft a working narrative let alone a well plotted thriller.

Picture: Like the other films in this set In Crowd is sourced from a really solid print. Black levels are fairly deep and grain is fine and consistent.

Sound: In Crowd has a pretty good DTS 2.0 Mono track. Dialogue such as it is and sound design all come through well.

I heard not great things about all these movies and while yes, maybe they arent the most shining examples of the thriller genre, I still found each one endearing partly because they have some interesting things going on despite the lack of polish, partly a guilty pleasure, in a late '90's-early '00's kinda way. This current retails for 12.99 on Amazon which is about 4 bucks a movie and you can't beat that. If you enjoy cheesy thrillers I think you`ll enjoy this set. Honestly, I think you get your moneys worth at least. Each movie feels like it plays slightly tongue  in cheek which helps me maybe forgive some of the offerings shortcomings. And as I say the transfers are sourced from pretty good prints especially for stuff that is twenty-to-twenty plus years old.