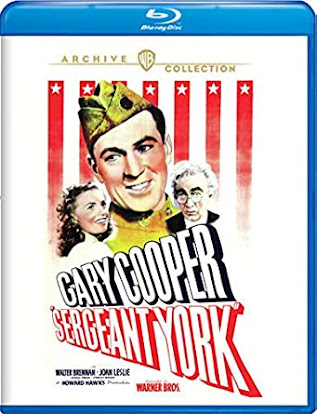 Warner Archives has really been doing an amazing job of opening up their vaults and providing fans with amazing HD presentations of classic films. Sergeant York (1941) marks it US Blu Ray premier and with it Archives fourth Howard Hawk film to date release (The Big Sleep, The Thing From Another World, To Have and Have Not). Alvin York (Gary Cooper) is a wild young man, but soon he starts to grow up and take on responsibility on his farm. In the wake of World War I, Alvin becomes the most celebrated hero of the conflict. Howard Hawk is a director that I feel like doesn't get talked about nearly as much as he should. His legacy and influences can be felt in such  filmmakers as John Carpenter, Robert Altman and Brian De Palma just to name a few.  Sergeant York which is a story set during WWI but interestingly enough was released just a few months before America entered WWII and is really a fascinating war movie. It's certainly a gung-ho flag waving, go-gett`em kind of war movie that the market was flooded with after Pearl Harbor and, later during the Korean conflict. Though what makes the film provocative is  how it explores the moral conflict in a soldier taking a life. After all this movie is of course based on the real life conscientious objector Alvin C. York who also served as technical advisor on the film.

Sgt. York is also one of those big epics that is thankfully afforded the time to unfold in an equally grand scale clocking in at over 2hrs but I never felt it was dull or bloated. I enjoyed how the film is first and foremost a character piece and is intimate enough to relate to everybody on at least some level. And of course Hawk's pin-point director and attention to detail is on full display complimented with  Sol Polito (The Adventures of Robin Hood) amazing photography and an underrated score by three time Oscar winner Max Steiner (Gone with the Wind). York features some incredible action scenes and is over flowing with rich production design and detail. Of course you cannot talk about this movie and not praise Gary Cooper, who, won his first of two Oscars for his portrayal of in the titular role.  Cooper reportedly turned the role down at first and its hard for me to see anybody else filling his shoes. The actor is tasked with playing a layered and complex role and he does it with heartfelt conviction and depth.  It's truly a film that proves why Cooper was among the best actors in the Golden Age of Hollywood.

I had never seen Sgt. York before this review, but being a fan of his classics like His Girl Friday (1940) and The Thing From Another World (1951) I was willing to give it a watch. I admit I am not a big War film yet I was happy that this movie while yes, is about WWI is, in my opinion more about the conflicts of war, religion and a deeply personal character study woven within. More cynical film fan's might say that this film had a agenda to get us primed to enter the conflict and maybe so, however I think its nuanced enough to make it thought provoking. Not to mention how amazingly directed, acted, scored and edited it is. Hawk's Sergeant York is that rare movie where every single element works in perfect harmony. The end result is a staggeringly awe-inspiring film.

Picture: I know I say this alot but WOW, Warner Archive has really outdone themselves with this brand new 4k transfer. The picture has depth and clarity that is stunning to look at. Blacks and white are handled very well with no artifacts or distortion. Black levels are deep and consistent. Clearly a lot of love, time and resources went into making this movie that is over seventy-years old look brand new. Grain is very fine and smoothed out to offer an excellent look.

Extra: Hawk fans will be pleased to hear that this disc has come great features. The film has a feature length commentary by Film Historian Jeannie Basinger. The track is lively and informative and worth a listen to. Sergeant York: For God and Country Making of Featurette (38mins) This feature narrated by Liam Neeson is an interesting and fascinating journey into making this classic. Seriously, the story behind this movie is really worth exploring.  Rounding out the features is: A vintage Porky Pig cartoon and a vintage short Lions for Sale and the Re-Issue Trailer.

Overall: I hope this film does well for WA because we need more amazing releases like Sgt. York. The film is such a classic and it looks and sounds amazing. Top this off with some fun and informative features and you have in my opinion the total package.