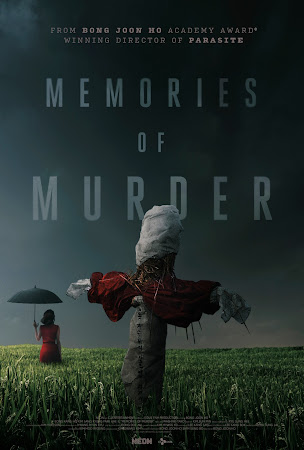 Oscar winning director Bong Joon Ho's 2003 crime thriller Memories of Murder makes its VOD debut today and, I'm here to tell you, if you haven't seen this one yet its a must watch. Memories starts off as a typical crime film yet Bong Joon Ho is cleverly lolls us into a ever twisting and disturbing web that is teeming with style and startling realism. The film is set in the early '80's and the backdrop of political unrest in South Korea certainly adds to the tension and dread-filled climate. Everybody is literally on edge and that feeling is palpable throughout the entire film.  Speaking of, the movie always feels very real yet slightly off-balance. Bong Joon creates this ever present creeping dread by means of  claustrophobic camera work and weirdly lit spaces. Strange scenes also abound like a officer losing his leg in a fight, this event doesn't impact the plot but only helps cleverly reinforces this painfully real narrative. Random things like this happen without ever leading to anything.

A driving theme is also how the detectives will seemingly go to any lengths to get confessions. The savage police brutality only further adds that even the so-called "good-guys" are just as sketchy, leading to very little in the way of actually likable characters and gave me a weird sense of alienation. Yet, you never get a sense that Bong Joon Ho is casting judgement but rather presents these morally grey police, police with the ideology that they are doing what's right for the greater good. Even if those means are cruel.  Its interesting that this film plays very by-the-numbers at first yet as it unravels the movie is more about the impact on the detectives sanity rather than the murders themselves. In fact, I think it's all the more brilliant and unsettling that we never actually find out who the killer is. It's a splinter in the mind of all those who worked on the case and, just as in real life the crime isn't wrapped up neatly at the finale. I know there is probably much more in the way of deeper meaning, subtext and metaphor that I didn't cover but this is my reflections upon my first viewing. What I took away is a staggeringly engrossing character study wrapped in a police thriller. Check it out!