The great Stanley Kubrick made six feature films for Warner Brothers and, amazingly the studio has painstakingly restored and released three of those features: The Shining (1980), 2001 A Space Odyssey (1968) and now, Full Metal Jacket (1987). 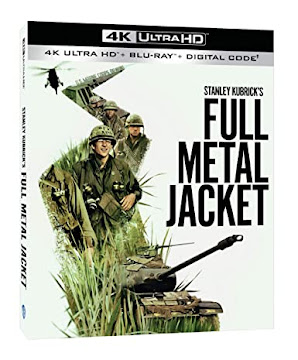 Summary: Stanley Kubrick's return to a war drama features glimpse into the Vietnam war, the way it dehumanizes and destroys. This raw and hard hitting film is on par with Apocalypse Now (1979).

Even those film fans who don't like war movies (and I include in that statement) have to give certain films like Full Metal Jacket (1987) a lot of credit. Stanley Kubrick's film takes a complex subject and boil it down its rawest elements and, in the process, feels like it captures the stress and intensity. Kubrick is no stranger to war films or films that savagely lampoon war. Paths of Glory from 1957 is set in World War I but was released during the Vietnam crisis and is hands down an  Anti-War film. Dr. Strangelove or: How I Learned to Stop Worrying and Love the Bomb (1964) is Kubrick at his satirical best and providing Peter Sellers his most iconic role outside of Inspector Clouseau. I know this is a long way to get to '87's FMJ but I think its important for context to see where Kubrick was in terms of his views on war.

Jacket starts with a grueling series of training scenes that show how tough, unrelenting and even brutal it can be. Kubrick makes it just as intense as if you were really going through the training yourself. Former actual drill sergeant R.Lee Eremy shines in what is easily his most iconic characters of the 20th century. The film does a violent shift in its latter half showing the trainee's now full fledged Marines in actual combat situations. The film unfolds with the kind of pin-point precision and awe-inspiring craftsmanship that Kubrick was world famous for. He was nearly sixty when he made this film but he raw energy of a people half his age. Hellish and visually stunning, Full Metal Jacket is an Anti-War film that is cleverly wrapped in a ultra-Partonic, blood drenched flag.

Picture:    Warner Brother's once again hits it at of the park with this UHD transfer. It's no shocker as 2001 and Shining are incredible examples of the kind of love and care they pour into these releases. Without a doubt I can say I don't think Full Metal Jacket has ever looked better. The up-tick in color gives everything a nice boost with skin tones looking natural. Grain is there (yes, because its shot on film) and is nicely consistent. People tend to knock UHD's for grain issues but it's par for the course when you have a film up-converted from a 35mm print. In fact, I think its a great sign that Warner was working from some great original elements. Clearly these elements were well taken care of because, as I said the picture transfer is stunning. The first part of the movie is a bit more muted in it's color scheme so its really not until the latter half  that it really gets to show off the more vibrate colors. Colors are balanced really well with a lot of striking images once the film gets into the action set pieces. Overall, I think fans of this film will be very pleased with how amazing this looks. The level of detail and depth the picture has really says to me that Warner's takes their time and the end result is a great looking film worth of it's brilliance.

Sound: Full Metal Jacket has both a DTS HD 5.1 but interestingly enough ported over the Mono track from the DVD version, which was missing from the previous Blu Ray release. I will be reviewing the 5.1 but it was a curious addition that I thought was worth mentioning. I know we all would have probably loved at ATMOS track but the 5.1 in my opinion perfectly does the job. For those of you with a sound system the 5.1 is fairy heavy in the front speakers and isnt maybe as complex as it could have been in terms of sound design i.e action coming through other speakers. Again, I think it still sounds great and dialogue, music and sound design all sound very healthy and robust.

Extras: This edition of course ports of the features that I believe were from an earlier release. This includes: A full length commentary by Adam Baldwin, Vincent D'Onofrio, R. Lee Eremy and Critic/Screenwriter Jay Cocks, A featurette entitled Full Metal Jacket: Between Good and Evil and a trailer. It's a very nice array of content and honestly I'm fine with Warner sinking their money into the visuals and audio. Yes, I love new content but at the end of the day its about celebrating the film in terms of its picture quality and sound.

Overall/Value: For those of you who already own The Shining and 2001: A Space Odyssey on UHD you know the kind of amazing work that they do to truly bring these masterpieces to life. If you are new to Warner's line of UHD titles, well you my friends are in for a treat as its a clear upgrade to the HD editions which were already pretty good in my opinion. Value wise this is a steal at 24.99 and the price typically goes down on Amazon. But, for me its every bit worth that and more. You also get the HD version as well as a digital copy so thats a nice array of formats in one set. I am beyond excited for the other Kubrick titles, so if you are new WB also has a thin film UHD set for sale as well. Extremely worth it. War is hell but Warner Bros Full Metal Jacket is Heaven for film buffs.