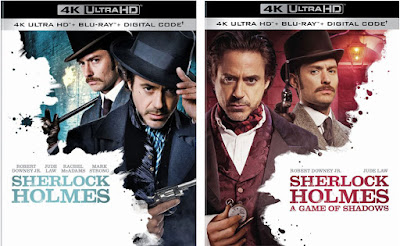 The legendary detective Sherlock Holmes (Robert Downey Jr) and his partner Dr. John Watson (Jude Law) are on the case of a series of mysterious deaths at the hands of Lord Blackwell (Mark Strong) an occultist.

It seemed strange to me when it was announced that Guy Richie was going to be directing the big budget re-tooling of the famous fictional sleuth. But, I happily ate my own skepticism as the film is a true gem. It's a well plotted, interesting film that is drenched in style, rich detail and a vision that works with Richie's tough-guy crime films. Robert Downey Jr and Judd Law really shine in their respective roles and they bring something interesting to the iconic characters. They are allowed to make it their own and you never feel like they are falling back on past incarnations. I enjoyed this movie in 2009 seeing it on the big screen and I have enjoyed it just as much throughout the decade plus that its been out.

HD: The 1080p is, as far as I can tell the same transfer as the previous HD edition. That's great because that was very well done. Colors are well balanced and consistently well handled throughout.

UHD: Holmes is presented in a 1:78 aspect ratio. Its worth noting that Sherlock Holmes and its sequel A Game of Shadows was filmed with a mixture of film and digital. The UHD utilizes HDR-10 Color grading and looks overall great. You might notice that the color tones on the UHD edition is a little darker and more muted. I think that this works incredible well for the mood/vibe of Richies version of turn of the century London. Skin tones and color is well balanced and grain is consistent throughout. Black levels are deep and also well balanced overall. Overall its a nice upgrade and I think the color levels are very fitting for the world its filmmakers have crafted. I'm thankful that we didnt get a unnaturally bright colorful print which I think would have ruined the mood that Guy Richie creates.

Okay: Im going to go out on a limb and say that not only is A Game of Shadows a damn good movie, I think I like it more than the original. Thats saying a lot because obviously I just got done gushing all over the first film. As sequels go, the film has the advantage of not having to spend the time setting up the main characters, the places etc. Richie is allowed to get right into the action which is bigger in scale and in my opinion is richer in overall story. The fact that now Moriarty was teased in the first film and now the main baddie in the second film makes it feel more organic to bring him into the series. And Jared Harris is fantastic as James Moriarty and I dont think we talk about that nearly as much as we should. He slays the house down, giving a subtle villainous performance for the ages. Cap this off with a fun re-telling of the 1893 story "The Final Problem" as well as "The Adventure of The Empty House" (1903) and you have a wonderful, moody and satisfying outing.

HD: Much like the first film the 1080p is overall well done. I believe this is the same HD transfer from its original release. That is far from a dig because that presentation was extremely well done. Grain is kept to a minimal and color tones are well balanced.

Overall: I think both Holmes movies are great. In fact as I said in my review I think the sequel is somehow even better. Warner Bros celebrates this movie with a great looking and sounding presentation that highlights Guy Richies vision for a gloomy, moody London. The UHD version I think highlights that thematic element nicely. And both are releases are actually nicely priced at 24.99 and probably lower if you go on Amazon. If you are a fan or are new to the series nows the perfect time to check them out or re-discover them in HD and UHD.