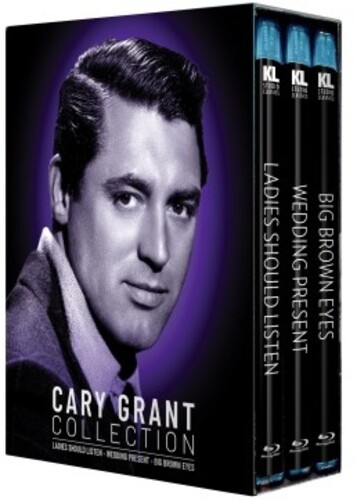 Kino Studio Classics has been releasing a series of collections celebrating iconic actors such as: Barbara Stanwyck, Tony Curtis and the set I will be reviewing today The Cary Grant Collection. In terms of favorite actors from Hollywood's Golden Age, Cary Grant ranks very high on that list. Looks, charm and talent, the man had it all. He could do serious roles and slapstick and anything in between. This is why I was so excited about this box set, especially since it features some Grant films we rarely talk about, but nonetheless showcase his incredible talents as an actor. I will be reviewing the three films included which are: Ladies Should Listen (1934), Wedding Present (1936), Big Brown Eyes (1936).

Despite starting his acting career only two years prior to Ladies Should Listen in 1934, Grant had over a dozen films under his belt. That's a lot of movies in just a short amount of time. You can see why Cary Grant sails through this breezy rom-com with ease. The thin plot revolves around a switch board operator named Anna (Frances Drake) who falls in love with rich playboy Julian (Cary Grant). Through her eavesdropping on the line she figures out a plot to con Julian out of money, and the two end up falling in love. I'll be frank in saying that Ladies isnt exactly a great film. I think the biggest issue is it feels like the characters are way underdeveloped in a screenplay that feels more like a first draft. This may have boiled down to budget issues with plot elements being rushed to save money. What rescues this is of course Grant who oozes likability, charm and sex appeal. And dont forget Frances Drake. Hardcore horror fan's will no doubt recall Drake from genre-classics like Mad Love (1935) from MGM and The Invisible Ray (1936) from Universal. With her big doe eyes and grace and ease in front of the camera Frances Drake can hold her own against the high energy of Grant's Julian. Thats not an easy thing to do but Drake proves she is more than up to the task. Frances Drake quit acting in the early '40's which is a shame because she was incredibly talented. Overall, its a flawed movie and its casual attitudes towards suicide and semi-toxic gender politics makes for an at times uneasy watch, however, I couldn't help but be swept up in Grant and Drake and their on screen magic.

The second film is Wedding Present directed by Richard Wallace. Though Wallace never made a name for himself in film he directed over sixty features in less than three decades. Charlie (Cary Grant) and Rusty (Joan Bennet) are a pair of clowns over at a city newspaper. Through a series of events Charlie finds himself the managing editor and with it he sheds his care free prankster ways as he cracks down on his staff. Rusty doesnt like this new Charlie and she wants to marry a different man. Hi-jinks ensue. If you have never heard of director Richard Wallace you`d be forgiven as, he good at crafting films but never carved out a name for himself like George Cukor and William Wyler. This film has very much a workmanship quality but lacks that moxie from other movies of the decade. The screenplay is better realized than Ladies Should Listen, however it still feels a bit disjointed at times. Seemingly important characters are introduced and quickly dropped and other important characters are sloppily introduced and not paid off correctly. But as far as breezy screwball rom-comedies its still a lot of fun. The charm comes of course from Cary Grant who is extremely likable and was great at physical comedy. Joan Bennet is also great and the pair play off of each other nicely. There are some really well done gags through out as well. Uneven in its writing but has enough laughs and enjoyable moments to make it well worth the watch!

Cary Grant and Joan Bennet are once again paired together in Big Brown Eyes released the same year as Wedding Present. Manicurist turned crime reporter Eve (Joan Bennet) teams up with Officer Danny Barr (Cary Grant) to bring down a racketeer leader and murderer.  Out of all three times this is probably in my opinion the best. The dialogue is witty and cracks with some pretty great gags along the way. The story is still a little uneven in places  not to mention the tone which awkwardly sways from sassy banter to serious gangsters not to mention a dead baby casually thrown into the mix. It feels like Walsh is working over time to make the serious gangster and comedy mesh well with some coherence. It's a credit to his genius that its all pulled together  Raoul Walsh (White Heat, The Roaring Twenties) who clearly knows how to make a good movie. Like the other films its largely its leading man, Cary Grant that carries the somewhat flawed narrative. Joan Bennet also sizzle in her respective role and she has maybe some of the best lines of the film. It's no wonder they paired the two together as both really play off each other nicely. While yes, the story could have used maybe another pass,  overall its a enjoyable film. This proto-Noir, comedy, mystery  crackles with whip smart dialogue and overflows the charm of Grant and the talent and beauty of Joan Bennet. Certainly a '30's era film that deserves to be re-discovered, just dont look too hard into the logic of it.

PICTURE/SOUND: I had never seen the previous DVD versions of all three films. Thankfully my friend at Cereal At Midnight  provided me with some screen shots to compare with the these new transfers. I had originally wanted to provide some side-by-side shots but due to computer issues I was not able to do so at this time. I will say seeing the older editions helped me see how nicely these new editions stack up. Very little dirt or artifacts are present and while the three films aren't flawless they are clearer/brighter in my opinion than the previous releases. You dont get any film grain or noise as well which was truly impressive for films this old. The sound on these new editions are also great with no background hiss or noise that I could notice and dialogue comes through crystal clear.

Features: Both Brown Eyes and Wedding Present feature a wonderful commentary by author and historians. Big Brown Eyes features commentary by Critic Nick Pinkerton and Wedding Present by historian Kat Ellinger. Both are lively, informative and well researched tracks. These are my favorite kinds of bonus feature so it was refreshing to see Kino provide these for two out of three of the films.

OVERALL: I'm a huge classic film fan plus I think Grant is among the best stars of the Golden Age of Hollywood, so this set is a winning combo. While these films have been on DVD, the leap forward to Blu Ray is well worth upgrading if you already own these. But, if you are me and are just discovering these '30's era comedies its the perfect time to own them. The value is great at a price on Amazon at just 34.99. Thats a great value for the movies alone but you get, in my opinion a far superior transfer and two out of three have great commentary for film buffs to devour. Its a must own for classic film fans and fans of the legendary suave actor.