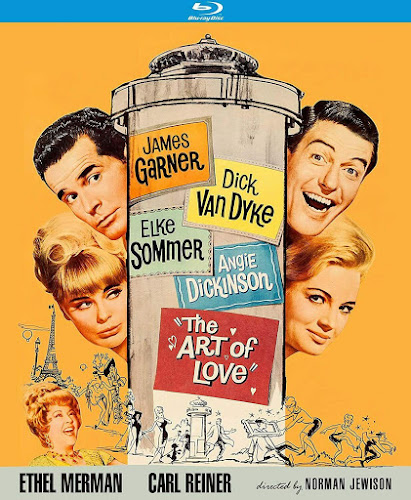 Trigger Warning: This film deals  subject matter such as depression,suicide and mental illness thus that aspect will be discussed. If this is a topic you wish to not read about, please do not read any further.

Legendary director Norman Lewison worked in just about every genre like hard hitting social drama's like In the Heat of the Night (1967), rom coms like Moonstruck (1987), and even musicals like Fiddler on the Roof (1971).  And, this swinging '60's comedy/romance The Art of Love (1965). Meet Casey (James Garner) a writer living in Paris, France and Paul (Dick Van Dyke) his painter roommate. Paul is deeply upset that his painting aren't selling. The two 'friends' go out one night drinking and Paul muses that if he killed himself maybe his work would sell. But, when Paul accidentally falls into the water, whilst saving a girl named Nikki (Elke Sommer). The police think that Paul died and Casey cons him into pretending he's dead to sell his paintings. Now hiding out and painting new works, Paul's fiance Laurie (Angie Dickinson) comes back to Paris, causing their scheme to fall apart.

The Art of Love from 1965 is a breezy, rom com outing that is a tag-of-war of timeless comedy and very dated troupes. Par for the course, movies from this era have some very  cringe-worthy elements when viewed by a modern lens. The biggest thing is the casual even funny way the topic of depression, suicide and mental illness in general is handled. The film has its share of other issues but, for now lets talk about the main draw for me: the cast. Its really the credit to the charm of both James Garner and Dick Van Dyke that they can, for the most part carry off such a dark at-face-value premise without going down a super bleak rabbit hole. Both actors are able to shine as individual actors but, also play off each other nicely. It's a comedy duo I never knew I needed.  The supporting cast dazzle as well, with the likes of  Angie Dickinson, Elke Sommer and of course, the larger than life Ethel Merman in all her iconic glory.

In Love what you get is a light screw ball comedy in the vain of something made in the '40's with a bolder and more risque (for the time) '60's update. The dialogue is at times sharply clever and witty also in the style of '40's comedies. Despite this the film feels bloated at times with lull's in the story with some pretty unbelievable bits of plot convenience. And, while some of the gags work well, others fell flat. And again, the film kind of swings big with this kind-of dark premise to hang its hat on yet treats it as a punch line, which, understandably not everybody's going to be into. Icky main premise aside, the script still feels like it could have used a tighter focus. This is pretty shocking that this wasn't better given that the legendary Carl Reiner wrote the script. Thats the thing though, on paper it seems like this would work, all the pieces are there from an insanely talented director, a fantastic cast and a heavy hitter writing the screenplay. Don't get me wrong, the film has some charms and funny bits but Garner and Dick Van Dyke really break their backs carrying this film.

The Art of Love has some nuggets of brilliance but gets lost in itself.

Kino Studio Classics boosts an impressive 2k transfer that truly highlights that photography of Russell Metty (Spartacus, Touch of Evil). The films colors are vivid (especially in Madam Cocos Club) and this new print truly makes them pop. Skin tones are well done as well as well as the color tone balance overall. This transfer has a smooth clear look with no artifacts or dirt to be found. It looks gorgeous. The sound is great as well with dialogue,music and sound design coming through crystal clear.  The features includes a very well researched and entertaining commentary by critic Peter Tonguette. Rounding out the features is a original trailer.