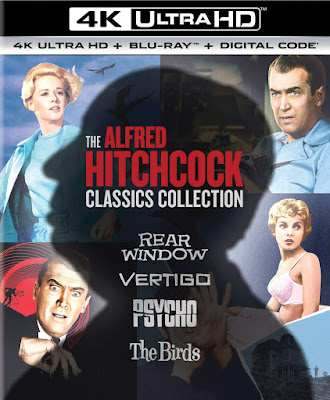 Minor Spoilers but...you know, I am assuming you have seen these already.

As a huge Hitchcock fan I nearly lost my mind when it was first announced that Universal was opening their vaults and providing a UHD and HD version of Four classic Hitchcock films. If that wasn't enough to get me coated in my own drool, it was also announced that this set would include the long awaited uncut version of Psycho (1960). Wisely, Universal also released Psycho (1960) as a standalone version and a Steelbook edition.  I will be reviewing the complete set as well as a breakdown out the minor added scenes in Psycho.

I will be provided very short plot summaries: but honestly I think everybody knows what these movies are about, even at this point just by cultural osmosis. Also I will be keeping my reviews of these fairly short as well, as again, these movies have been well covered, with entire books being devoted to some of them. Therefore I dont think I could really add much to the overall discourse on these films.

Plot summary: When housebound with a broken leg photographer L.B Jefferies (James Stewart) witnesses a murder on the other side of his apt building. Aided by his caretaker Stella (Thelma Ritter) and the stylish girlfriend/girl Friday Lisa (Grace Kelly) they must find out what really happened before they end up the killers next victim.

When I think of a movie to recommend to a new Hitchcock fan that hasn't seen anything outside of Birds/Psycho I always tell them to watch Rear Window. Is it my absolute favorite from Hitchcock? No, that would be Vertigo. But, Window is a good entry point because it embodies a lot of the directors themes and troupes but is easier to digest. The film is a prime example of lean storytelling where no scene is throwaway with every single scene works to to flesh out characters and move the story forward. This  thriller hangs its hat on rich visual storytelling, a wonderful witty and layered screenplay all brought to life with a dream cast from Hollywood's Golden Age. Stewart plays his every-man character to a t, and Grace Kelly is like something out of a dream. It also has a fantastic supporting cast including Wendell Corey, Raymond Burr and Thelma Ritter. This is a classic that is  smart and downright gripping. Bottom line its a classic for a reason.

4K: Rear Window gets a wonderful boost from its HDR-10 Color grading. Detail levels are just stunning and the color's pop. The skin tones look natural and well balanced and wardrobe from the legendary Edith Head are truly celebrated in this transfer. Film grain is consistent throughout and thankfully it looks like no D&R was used to correct or smooth the picture. Black's are deep and again very consistent all the way through the run-time.

Sound: This set includes a DTS 2.0 Mono Track. As with all of these, they are very front and center heavy, providing a rich and healthy sound levels. Dialogue, sound design and music come through crystal clear and layered. It's a really nice compliment to the extremely well done transfer.

Pure Cinema: Through the Eyes of The Master

Breaking Barriers: The Sound of Hitchcock

Detective Scott Ferguson (James Stewart) finds himself caught up in a web of psycho-sexual thrills and a dark mystery, after he develops vertigo after a traumatic event involving the death of a police officer.

Vertigo is possibly one of my all time favorite films. That's saying something since I've seen thousands and thousands of movies. It flopped in its original release but has gone on to be rightly re-discovered as the complex masterpiece it is. It's hard to sum up such a movie in so little words but if I would attempt to try I would say: Its a dark, deeply twisted film in a cerebral sense and bold for its time for being allowed to be surreal and float around abstract ideas.  It finds a way to transcend the medium into something truly sublime and is as close to perfect as a film can get.  If you want to do a deep dive into this film and its subtext and layers read: The Art of Alfred Hitchcock by Donald Spoto. Its the last word for Vertigo in my opinion.

4K: The high contrast in the new UHD release is amazing. Again Universal is using HDR-10 Color grading. Colors are an important apart of this film and this new transfer sports in my opinion greater depth and details are considerably sharper in this new transfer. Black levels are deep and consistent as is the film grade. Skin tones look great and details like set, wardrobe and production design all truly are celebrated here. I'm really glad this movie looks amazing because its my favorite in Hitchcock's catalog and this really does the film's brilliance justice.

Sound: Vertigo has a DTX and DTX 2.0 Mono Track. I will be talking about the 2.0 Mono track which in my opinion works very well. It's front channel heavy and dialogue, sound design and music score comes through very clear.

Plot summary: A night at the Bates Motel might just prove deadly in this psycho-thriller that made us all afraid of taking a shower.

Even non-Hitchcock fan's probably at least have a pretty good idea/understanding through cultural osmosis if not have seen or, or at least know the twist because of how embedded into pop culture it is. Norman Bates is even a byword for creepy psycho type. It's hard for anyone of a certain age to not live in a world where Psycho is so firmly in the subculture. It may be watered down now, but this movie was truly a shocker when it was unleashed on a movie going audience. It helped usher in the modern horror film and is often cited as a proto-slasher that would catch fire with the release of Halloween (1978). In fact, if you are a Halloween fan, there are some references such as Sam Loomis being a character in Hitchcock's film long before it was used in the famous slasher flick. A true classic.

4K: Psycho (1960) is the only black and white film on this list, and also the only feature to have a stand alone release as for now. I have to say I have seen this movie probably 40-50 times and this HDR-10 upgrade makes it feel like watching it for the first time. Details are insanely sharp and vivid with deep blacks and nice contrasting tones that look consistently good throughout. I wager that this movie has never looked this good or probably will never look better, at least not for the foreseeable future. Universal really has knocked it out of the park here.

Sound: Sound wise Psycho does not have its original Mono track but rather a 5.1 mix. For purest this might be disappointing but honestly I think the DTS and DTX 2.0 are great. Again the sound play well on the front and center channels. The iconic shower scene with this mix sounded amazing.

Uncut Footage: Whats In It?

So, before you get too excited the new footage amounts to maybe 15-20 seconds.

Norman Washing Up: A few extra seconds of Norman washing off blood after the murder scene.

How Does it Look: Universal really spent a lot of time and resources to make these cut scenes look seamless. Seriously, you cannot even tell that these new scenes were dropped in there and thats the way it should be. Good on Universal!

FYI: To access either version just hit Play, it was take you to a menu on the right giving you the option to play the wide release Psycho or the Uncut version.

Extras: The Making Of Psycho

In the Masters Shadow: Hitchcock's Legacy

Newsreel Footage: The Release of Psycho
The Shower Scene: with and without Music
The Shower Scequence: Storyboards By Saul Bass
The Psycho Archives
Posters and Psycho Ads
Lobby Cards
Behind the Scenes Photographs
Production Photographs
Psycho Theatrical Trailers
Psycho Re-Release Trailers
Feature Length Commentary with Stephen Rebello, author of Alfred Hitchcock and The Making of Psycho

Plot summary: A small coastal town is under attack by birds in this horrifying nature-run-amok outing by the master of suspense.

Much like Psycho (1960), most horror fans and non Hitchcock fans have seen or at least have a pretty good idea what this movie is about. It's a film that is probably a lot slower than you much expect but its still as tense and engrossing today as it was in '62. Birds would go onto inspire a entire nature-run-amok sub genre which would reach its highest point in Jaws (1975). And, much like Psycho, its hard to picture a time before this movie wasn't firmly established into the popular culture.

4K: The Birds sports a new HDR-10 Color grading. Again, attention to detail is staggering. The colors are given a nice boost and retains a lot of details in the production design, wardrobe etc. I mean, the colors truly pop in this version.

Sound: The Birds has a DTX 2.0 track that like the others is layered, mostly centered on the front speakers. Sound design especially with the bird sounds are well handled and balanced sound wise.

All About The Birds

Here is a few pictures I took of the set. 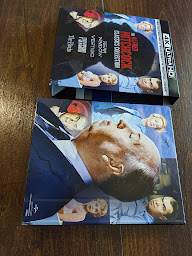 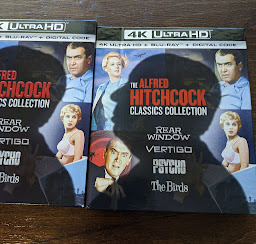 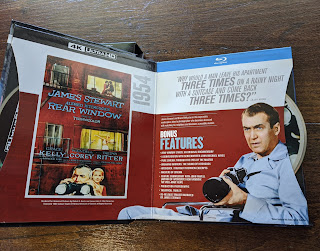 As I said I am a huge fan of Hitchcock and I own nearly his entire filmography in one format or another. But having the best of the Masters work on UHD is really something to be excited about.  It's clear a lot of time and resources went into this collection and I'm here to tell you its not just a half-ass'd attempt to milk more money out of these IP's. If that were they case they wouldn't look and sound as good as they do, nor would they have taken steps to release the long awaited uncut version of Psycho. Speaking of, I think it was a very smart move to re-release Psycho as  standalone.

Should You Upgrade: If you dont own these already, or you only own them on DVD I would say that its time to upgrade these bad boys ASAP. If you already own the Blu Ray's, I think it depends on how die hard you are. Honestly, its worth getting for the UHD's alone, not to mention both versions of Psycho. I know some fans might be on the fence but if you have a 4K player and TV this is an awesome collection to show off the clarity in my opinion. The price may seem steep but when you consider you get eight disc's its really not that bad. For my money its worth very single penny and it's very awesome to see a big studio like Universal truly celebrating their past films. If you are new to Hitchcock and only know him for The Birds and Psycho I implore you to give Vertigo and Rear Window a watch. For movie buffs this should be considered a must-own. 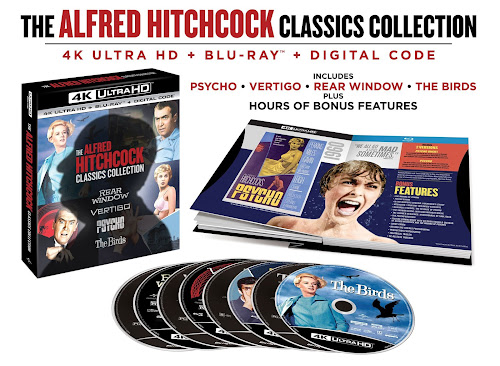