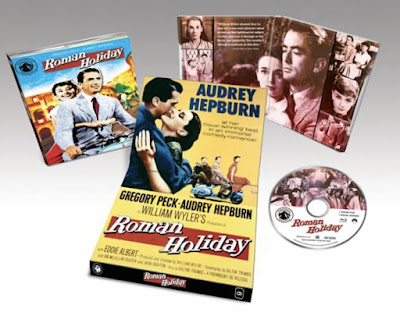 Paramount has to much fan fare opened up their vaults with their ninth film in this series, the classic '50's romantic comedy Roman Holiday (1955). A princess named Ann (Audrey Hepburn) is fed up with her boring life of schedules and rules. She is found out by a reporter named Joe (Gregory Peck) and the pair have a whirlwind romance in Rome.

Director William Wyler was and is a legend in the film industry. His credits include classics like Ben Hur (1959), The Best Years of Our Lives (1946) and of course Roman Holiday. In the annals of classic film, other films maybe be more important but, few are as charming, exciting and spellbinding than Roman Holiday. Its a rare movie where every single element comes together. From its razor sharp witted screenplay (co-written by the legendary Dalton Trumbo), costumes by the iconic Edith Head, lavishly detailed production design and underrated score by Georges Auric, everything just works in perfect harmony. And Rome! Wyler fought hard for the bulk of the production to be filmed on location in Rome and, it's photographed in all its breathtaking beauty. Seriously, the camera makes love to the city like no other film before it and that few has since. And of course, the film has such an amazing cast. Hepburn just dazzles as Princess Ann and has the kind of rare combo of beauty, pose, and grace but, had a down to earth quality. She's so effortless in transfixing the audience.  Peck oozes charm, talent and while he looks every bit a movie star he also has a relatable quality to him. The pair truly play off each other in a way that feels organic and not focused. Simply put, they make screen magic together. It's also fun to see a pre-Green Arches (1965-1971) Eddie Albert as a Hollywood's version of a beatnik. Albert has great comedy chops and certainly makes the most of his screen time.

I think Roman Holiday survives as a classic because not only is it incredibly well crafted on a technical level but, it has just the right amount of breezy romance, wit and charming humor, but at its core its explores relatable themes like: wanting to escape your boring world and who hasn't wanted to just take off and have a holiday in a beauty city like Rome? If you have never seen this film, you are really in for a treat. And, if like me you are an old fan, this new edition is well worth upgrading.

Shockingly Roman Holiday has never been on HD in the US until now. The transfer is wonderful and according to a press release put out by Paramount was a huge undertaking as the original negative was in bad shape. You would never be able to tell though as this print is beautiful with sharp clairty and details that nearly leap out at you! Seriously, I have seen this many times and I was just bowled over by how extreme wonderful it looks. Clearly Paramount is putting a lot of time and resources into making their older films come to life for fans both old and new. We also get a nice remastered mono track that again, is really well balanced with dialogue, music and sound design coming through nicely.

CLICK HERE for a video with Leonard Maltin discussing the restoration process.

BUT: They dont stop there! They have provided extras ported over from previous DVD editions as well as something new just for this release.

NEW: Filmmaker Focus: Leonard Maltin on Roman Holiday (6mins). In this interview with the famous critic he talks about the film and some very interesting aspects of its history. Also, why he right thinks its a classic decades after its release. Its a wonderful addition.

We also get ported over some nice featurettes including:

Behind the Gates: Costumes

Rome with a Princess

Dalton Trumbo: From A-List to Blacklist

Paramount in the 50's: Remembering Audrey

I also want to mention the packaging which is also wonderful.

This is the first film I've reviewed in the Paramount Presents line, and WOW I am impressed. They could have slapped an old transfer and sound mix but they put a lot of time making this film shine.

A classic film fan should not be without this film in their collection.