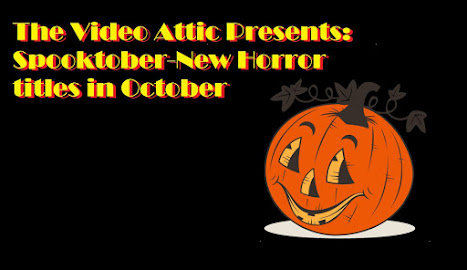 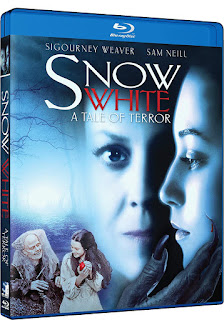 The 1990's brought with it this interesting trend of taking IP's based on classic literature and giving them a big lavish film production. This started and perhaps was made popular by Francis Ford Coppla's 1992 smash hit Bram Stoker's Dracula. Universal would follow this up with Mary Shelley's Frankenstein (1994) and Wolf (1994). There was also a trend taking popular folklore and Brothers Grimm fairy tales and giving them a edgy but still period update. After the death of his wife Noblemen Frederick Hoffman (Sam Neil) starts courting and later marries Claudia (Sigourney Weaver). Lilli (Monica Keener) Fredericks daughter now all grown up most face the wrath of her wicked Stepmother in this dark re-telling.

Snow White A Tale of Evil is pretty exciting release for me personally, as it was a video cover I has often seen at my local rental shop but never watched. This seemed like a good excuse to finally check it out. The end result is...somewhat of a mixed bag. The film seemed to have been savaged by critics upon it's release yet I think it is good, but not great. So, first off I love when filmmakers can take familiar iconography such as from fairy tales or legends, lull us in a false sense of security, only to have those expectations delightfully subverted.  Michael Cohn does a good job at taking base elements of the Grimms tale (which were incredible dark) and elevating and working them into twisted things. Cohn clearly takes devilish glee in giving us a very adult fairy tell that is more in line with the original text. Visually the film has a very heighted surreal feel which feels perfectly at home with the fairy tale origins.  Sigourney Weaver, what is there to say other than she OWNS this role. Weaver gives us a Wicked Stepmother but, she plays it with an interesting complexity that is worth the price of admission. Make no mistake, she's ruthless but the cool thing is she isnt always foaming out the mouth evil and has some very 'motherly' moments with our heroine. The film also features some top notch practical makeup and effects. So...for the not so good aspects.

You cannot say Snow White A Tale of Evil  doesn't try hard, and has a very solid first act the rest of the film kind of falls apart. The second and third act feels disjointed and, again is ambitious but not as focused or polished as it could be. The film was made on a pretty big budget (26-30 million) but somehow the film still manages to have a cheap look at times. This is especially odd because the production design also seems very capable. I think the other biggest issue I had with the film is, while it does inject some taboo subjects like cannibalism, I think that the themes could have been pushed further. As it stands now the film is only half-in on on its concept and I would have loved it if they had pushed its boundaries. Bottom line: they played it safe but still sold it as an edgy adult fairy tale that's 'not your fathers Snow White'. It's also worth noting that while Weaver shines in the role despite some hamming it up, Sam Neil's performance is, shall we say not his finest.

Snow White: A Tale of Terror is a deeply flawed film but, despite itself I still found it engaging, with some solid performances, nice set-pieces and, as I said Weaver is sublime in a role that she takes just barely over into the campy realm but, always, has the zero hero pulls it back again. Director Michael Cohn tried for something similar to what Tim Burton would do two years later much better in Sleepy Hollow (1999), and its a shame that a script doctor wasn't brought in to help pull some sloppy narrative threads together.