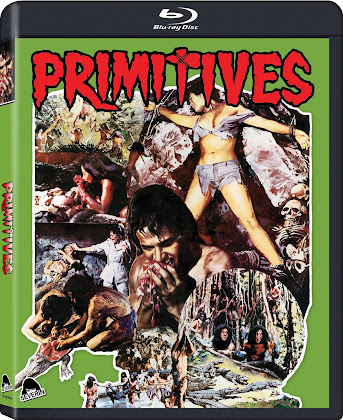 I'm a big fan of Indonesian genre films so whenever something obscure is unearthed I always get incredible excited. And this one stars  cult superstar Barry Prima probably best remembered for The Warrior (1981). Primitives is actually the second film Severin has unleased by it's director, Sisworo Gautama Putra. They previously brought to market the cult film Satan's Slaves (1982) which is still available to purchase on their website HERE. After their raft suffers a horrible accident three students and their guide are captured by a tribe of blood thirsty people with a taste for flesh.

Primitives is a cannibal film I had heard of but haven't seen until now. My impression of the film is its not nearly as bonkers as other Indo genre fare but still has plenty gross-out, weird moments. Pacing wise the film is a little on the slow side but never boring as some form of sleaze and grotesques moment is thrown at the audience. Genital mutilations,  torture and golden showers are just a few of the what the fuck moments presented within. And, it being a cannibal movie we get some stock footage of animals attacking other animals.

Speaking of which sadly real animals seem to be killed for the sake of this movie and its a troupe in these films I honestly could do without. I only hope that these animals were at least used for food and not wasted. This might be a deal breaker for some viewers and I dont blame you, but when you watch a cannibal movie from the 70's-80's its sort of par for the course. In terms of story there really isn't much of one but its rather some shock value set pieces taped together with a standard students survival arc. Bare chested Barry Prima is, as always a nice addition to the film and is a solid leading man. The production value is also pretty decent all things considered and the "lair" where the cannibal tribe calls home is actually very cool looking. On location shooting also gives the film a bigger look on a dime budget.

Not the weirdest movie of its ilk and not even my favorite cannibal movie, however it has enough strange moments and decent pacing that keep it from getting dull and in the end thats all that really matters. And honestly, I still had fun with this one because minus the animal stuff, the movie is hooky and shlock goodness.

Picture: The film opens with a title card that reads: PRIMITIVES has been remastered from its original negative in Jakarta. However, the opening and closing title sequences were missing from the negative and are considered lost. The Titles herein were scanned from a 35mm German release print.

Severin provided a really nice looking movie in 1080p. This is without a doubt the best this film will probably ever look. This is a movie that takes place outdoors and we get such a lush and vibrant greens, blues and blood reds. Blacks are deep and the film is not washed out with a lot of warm vivid colors that is all the more impressive when you consider the amount of work that went into cleaning this film up. Darkly lit scenes benefit the most from this upgrade. I gotta give the label huge props for the efforts in restoring a film many might not consider worthy of such an undertaking.

Sound: Primitives includes a nice 2.0 Mono track. dialogue is clear as well as the sound design and score. It's pretty much what you come to expect from a 2.0 track, its not amazing on a sound system but damn if it doesn't do the trick nonetheless.

Extras: As always Severin offers some extra goodies for sickos. This includes Producing Primitives: An Interview with Producer Gope T. Samtaini (7mins) This lively interview explores the making of the film and the chaos of filming on location in an actual jungle among other things. A great rare insight into the films production.

Way Down in the Jungle: An Interview with Screenwriter Imam Tantowi (10mins) A ten minute interview with the screenwriter.  Again, Mr. Tantowi offers up some real nuggets of interesting trivia on the production and origins of Primitives.

As always Severin provides some very informative extras and the rare interviews offer a rare glimpse into the production which might have been lost to time otherwise.

Overall: Severin and Mondo Macabro are the two best sources for crazy, whacked out international fare and those looking to expand their cannibal film collection are in luck. Primitives really impressed me by how good it looked and as always, Severin likes to include some great exclusive extras to make it tasty. Severin as also released this month another cannibal title Massacre in Dinosaur Valley (1985) from Italy which I will be reviewing soon.