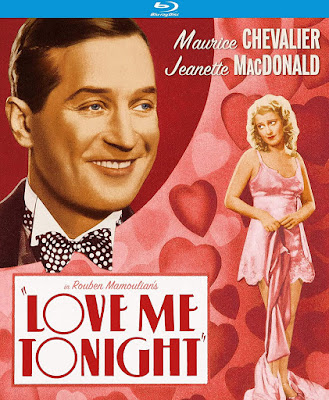 Kino Studio Classics has provided classic film buff's with yet another gem from the Pre-Code era. Maurice (Maurice Chevalier) is a tailor struggling to make a name for himself in his new business. His only client, a wealthy man named Viscount de'Vareze (Charles Ruggles) ranks up a huge tailor bill but sadly never pays him. Now, Maurice must pose as a Baron in order to get his money. And, in breezy madcap fashion falls for the Princess (Jeanette MacDonald).

The film starts out with this really cool rhythmic even music-like sound of people working in a small village, and right away you can tell the movie is going to have gusto and flare. Nearly ninety minutes later I can see why this is considered a classic among classic Hollywood musicals. Director Rouben Mamoulians was in his early thirties when he made Love Me Tonight and you can tell this was made by a youthful energetic person with moxie by the truckload. The plot is breathless in its pace but knows exactly when to linger on a moment. I must say I'm the first to admit I am not a huge musical fan but Love Me Tonight has catchy songs but also cleverly injects lyrical dialogue and sound design that beautiful complements the entire affair.  From a technical standpoint the film is also wonderfully stylist and inventive, having been the first film to use zoom lens. Oscar winning cinematographer Victor Milner shoots this film masterfully and his work in this film gives everything a grand feel but also crafts a moody that further elevates an already great film. For example, to highlight a spooky scene with a three weird sisters like trio doing their stuff, Milner uses effective long shadows in the vein of German expressionism. A lot of this kind of style can also be seen in Mamoulians version of Dr. Jekyll and Mr. Hyde (1931).

The cast is also great with Maurice Chevalier in his prime. Suave, handsome and of course could croon the house down, Chevalier is pure leading man. His parring with  Jeanette MacDonald is dazzling. It's also fun to see one of my favorite comic actors Charles Ruggles as well as young pre- Thin Man (1934) Myrna Loy. As good as MacDonald is, Loy absolutely steals the show. This movie is so chocked full of colorful and amazing character actors that you no doubt have seen in other movies, if you, like me are a TCM junkie. I am kind of shocked that it took me this long to see this movie but I am very glad that I gave it a watch.

Not only is it awesome that Kino Studio Classics has made this movie available to the public but the label truly celebrates it like it should be. The film boosts a Brand New 4K master and wow is all the first word that comes to mind. I've never seen this film but I cant imagine its ever looked this good. The image is scrubbed of any scratches or artifacts. What we get is smooth, clear film that looks sharp and showcases the gorgeous photography of Victor Milner. The blacks have a lot of depth to them and though there is grain, it is consistent and not distracting in the least. The sound is also great with the musical numbers, dialogue and sound design coming through nicely. The disc also is packed with some really fun extras. The film has a running commentary by historian Miles Kreuger (President and Founder of the Institute for American Musicals). Miles does a great job at giving us a lot of background on the music, actors and director which is very engaging and insightful. We also get two extra musical numbers: Maurice Chevalier sings "Louise and Jeanette MacDonald Sings "Love Me Tonight (From the Paramount Newsreel Series Hollywood on Parade.)

Screenplay Excerpts of Deleted Scenes, which is pretty self explanatory and, Production Documents and Censorship Records, which is a interesting look at the kind of censorship problems the film faced. Rounding out the features is a Theatrical Trailer.

This film looks amazing, sounds amazing and has a lot of great historial context via its bonus material. For me its a total package and if you are a musical buff and or a fan of Hollywood films from the '30's, you should not be without this film in your collection.

If you are interested in seeing more of director Rouben Mamoulians work Kino also has the following titles available:  Song of Songs (1933), Becky Sharp (1935) and The Mark of Zorro (1940).  Click Here.