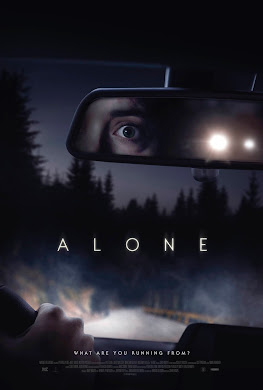 Jules Willcox (Netflix’s Bloodline) stars in ALOE as Jessica, a grief-stricken widow who flees the city in an attempt to cope with the loss of her husband. When Jessica is kidnapped by a mysterious man and locked in a cabin in the Pacific Northwest, she escapes into the wilderness and is pursued by her captor. The key cast includes Marc Menchaca (Ozark, The Outsider) and Anthony Heald (The Silence Of The Lambs).

Trigger Warning: This movie deals with depression and suicide. If this is something that triggers you, you might want to stop reading and avoid this movie.

Okay so Alone (2020) is I call a  three-star movie. If you don’t know the term it basically refers to the star rating on Letterboxd which has a max. of five stars. So, a three-star movie is just good enough, it’s not amazing but it’s a perfectly enjoyable even re-watchable outing. Now that may sound like a backhanded compliment but it’s not. The film is respectable for taking a pretty by-the-numbers survivalist horror outing and elevates it in a few ways. The first is how the screenwriter took the time to flesh out both the victim played amazingly by Jules Wilcox and, in such a limited amount of time we get a pretty good sense of who she is and the kind of pain she has recently been through. Same goes with Marc Menchaca, and though we never actually know his name (a stroke of genius in my opinion), we get a glimpse into his home life, an added depth rarely afforded to the psycho-killer.

Writer Mattias Olsson really knows how to take core emotional themes to it’s logical and satisfying conclusion. Jessica fighting to live and linking that to her husband killing himself isn't exactly a subtle one but I think it makes for an interesting parallel.  We've seen other films where the core themes are survival, overcoming depression and battling your demons, so yes Alone isn't exactly fresh with its takes but it’s well written enough that I think its easy to gloss over some of it’s shortcomings. The film doesn’t swing for the fences but doesn’t really need to. The filmmakers manage to create a nice amount of tension that starts to feel like a rip-cord by the pulse pounding finale. And, I wish I could talk about the ending because it’s pretty great in my opinion. My biggest complaint would be the film, while solid feels like it lacks the kind of twists or subversions to the genre that would have made this truly stand out. However, thanks for great direction, nice set pieces and great actors like Jules Wilcox(Bloodline), Marc Menchaca (Ozark) and Anthony Heald (The Silence of the Lambs)and Alone just narrowly escapes its own pretty routine premise. Good not great but in my opinion a movie that has more depth and heart than most. Check it out and cheers to the three star movies!

I got a chance to interview director John Hyman and actor Jules Wilcox Click Here for that.

Magnet Releasing will release ALONE in theaters and on demand September 18th, 2020.