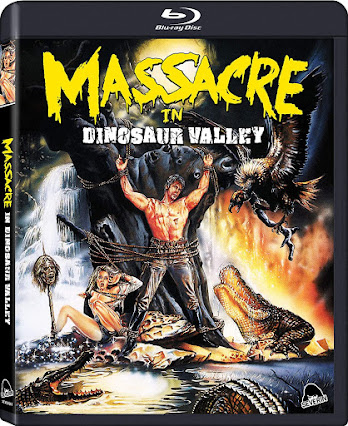 Severin Films it seems is always looking out for my cannibal collection and this month we get two new HD releases in the genre, Primitives (1980) and, the film I`ll be talking about today Massacre in Dinosaur Valley (1985). When their plane crashes deep in the Amazon jungles, a rug-tug group must survive blood thirsty cannibals, dangerous wildlife and slave traders. Who says there isn't truth in advertising, as the art for Massacre in Dinosaur Valley truly sums up what kind of outing your in for. Massacre, like most Italian horror/exploitations fare, you certainly know what your in for but, I'm always still taken aback by the levels of un abashed sleaze. This movie is overflowing with nudity and sex and in true Grindhouse spirit, it doesn't even try to justify its wonderful perversion. And, what would a movie like this be without a healthy dose of over-the-top acting whilst spouting some amazingly hilarious/bad dialogue. It's hard to name on example but, the Professors cheesy death and the exchange followed immediately afterwards is priceless. As far as the "plot" goes, it's actually fairly above avenge with a enough action and violence to keep me engaged. Speaking of, the splatter is really well done with some great practical gore gags.

I also think that, for those looking to dip their toes into the cannibal genre would find this a good starter movie. It's got all the elements of a typical gut-munching Italian romp, but has a more traditional narrative and isn't as intense or your in face as say, Cannibal Holocaust (1980) or Cannibal Ferox (1981). Thankfully it also doesn't have any real-life animal killing which sadly plagues a lot of films of this ilk. And, while this film is graphic, its not as hardcore as the films mentioned above. Overall, the film may not be the most intense, or insane film in the pantheon of cannibal movies but I actually think the plot is good,  and is never dull as there is always something going on, whether it be unintentionally  funny or, just plain weird, horny a combo of both.  Cult fans will no doubt recognize star Michael Sopkiw as the beer guzzling Peter in Devil Fish (1984) or Jake 'Tiger' Sharp in Blastfighter (1984). With his bare chest out for 95% of the film Michael Sopkiw despite his grizzled demeanor and zero personality manages to pulls off the mantle of action hero with all the bravado and swagger you can stomach. Sopkiw is in my opinion helps make this movie work and oozes the kind of roughish charm that could match Harrison Ford's Han Solo or Indie. The film throws a lot at its audience and though it makes for a muddled narrative, it insures that you`ll be anything but bored. This movie is way more fun than it has any right to.

Massacre in Dinosaur Valley is like Indiana Jones, if Indiana Jones was made by glue huffing perverts. A must see!

Picture: Severin clearly was working from was really well taken care of elements as Massacre in Dinosaur Valley looks great.  The film turns 35 years old this year and you wouldn't be able to tell, as the new uncut 4k transfer is clear with lush vivid colors. Grain levels look nice and, are consistent throughout. Image looks smooth without any blurring that I could notice. I really am amazed with the level of detail and clarity Severin gets with this release.

Extras:  As always Severin doesn't half ass their releases and provides fans with a nice array of extras.

Valley Boy: A New Interview with Actor Michael Sopkiw (23mins): This is a highly entertaining interview with Sopkiw, the interesting way he started his career and how he got into working as a model and after that as an actor. Later on we get some great insights into the making of Massacre in Dinosaur Valley.

Lost in Brazil Interview with Co-Writer Dardano Sacchetti (14 mins) The very charming  Dardano Sacchetti is, like Michael a lot of fun to listen to, and you hang on his every word. This interview is chocked full of great information and colorful stories you`ll really enjoy hearing.

Deleted and Extended Scenes Reel (9mins) Both in English and Italian.