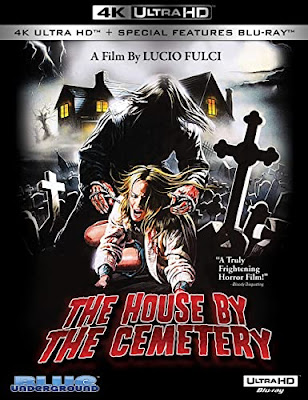 The third and final film in Lucio Fulci’s ‘Gates of Hell’ trilogy, House by the Cemetery seems to be the one people least talk about. Sure, it's not as good as The Beyond or City of the Living Dead but it's still a film very much in keeping with Fulci’s other ultra-gore-soaked fever dreams. A couple and their young son move into a charming New England home, and all seems perfect for the young family. Things soon spiral into a waking nightmare however, as the new occupants are plagued by horrific happenings that stem from the home’s gruesome past.
From minute one, Fulci masterfully turns the screws for the audience, giving us a nice moment of suspense paid off by his signature pension for splatter. As I said House isnt my favorite out of the three films but where the film may lack in polish it more than makes up for in its interesting concept. The mythos around Doctor Freudstein is nicely handled with a great pay off. As a boogeyman, Freudstein is tops in my book. In standard Fulci fashion the film have a nice surreal quality  that gives the entire film an off-balanced, other worldly vibe. I respect the fact that Fulci turns the haunted house genre on its ear with his own flavor and creepy vibes. Speaking of this, the film has a nice visual style. I know Argento is the more stylish out of the two but I think Fulci never gets enough credit in this field. In this film he uses colors well and makes the most of his palate without going over-board. The next result is a twisted beautiful nightmare only a mad brain like Fulci could conjure. The film is not without its silly moments - the bat attack scene for example hasn’t aged very well but honestly, it's not nearly as cringey as the spider scene in The Beyond. For gorehounds it's not as gory as Fulci’s other films like Zombie, New York Ripper etc. There are also some lulls in the story, which is not great for a film that’s under 90 minutes long.
Picture: Much like New York Ripper, Blue Underground has done a fantastic job with this new UHD transfer. Right away I noticed that the color is more vibrate, with darkly lit scenes truly benefiting from this new upgraded print. Overall, details are sharper with skin tones looking natural and well balanced. Grain is smooth and consistent throughout. I thought that the regular HD looked amazing but, BU has once again outdone themselves with this release.
Sound: House by the Cemetery is presented in both it's Mono mix, DTS-HD 5.1 and most exciting a ATMOS track. Those of you out there with a nice sound system will really get a more complex, layered and 3D sound out of this new ATMOS track. It's really stunning and takes advantages of the films score and sound design.
Extras:
Overall/Final Thought: You might be wondering if you should upgrade if you already own the previous 3-Disc Edition. I would say if you have the means to play 4K UHD films it's so worth the upgrade. I can say without a doubt that you are getting a better picture, better sound and with all the previous extras ported over. Sure, you dont get the CD soundtrack, hence why I think hardcore fans should double dip with this one. If you don't own this already somehow, now is the perfect time to upgrade.
Blue Underground's House by the Cemetery (1981) UHD release celebrates Fulci in all his gory glory. A Must Own!
Posted by The Video Attic at 8:03 AM