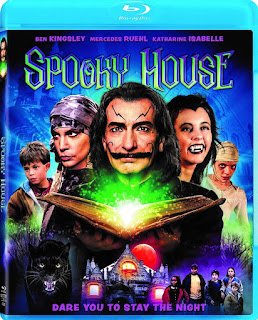 Just in time for the Halloween season comes Spooky House (2002). Everybody has that neighborhood has that person who is kind of odd or creepy, and retired magician The Great Zamboni (Ben Kingsley). An orphan named Max (Matt Weinberg) becomes friends with the kooky Zamboni and this friendship will take him and his friends on a Halloween adventure.

Movies like Spooky House are frustrating because I can see where there's a good movie somewhere in this over bloated mess.  First off, the movie felt very dated even for 2002 and, in fact I later learned that the film was filmed in '98 and released in 2002. It's interesting how quickly I picked up on that 90's vibe but also just how much movies changed from the time it was shot and by the time it was finally released. The soundtrack doesn't do the film any favors which is painfully generic and at times kind of unbearable. But, I think I could have easily glossed over but the film has some serious issues in its screenplay. I simplified the plot summary because there is a lot going on in this film and the end result is a story that feels woefully unfocused. Worse yet Sachs doesn't quite know how to connect these story threads together in a meaningful and satisfying way. We start out with a group of kids and you might think that they have an important part to play in the narrative yet, strangely the kids all disappear for a big chunk of the movie, leaving Max the sole focus. The gang does re-unit but again, they don't have a huge impact on the story both thematically or action wise. Not to mention the dialogue is pretty bad, the Native American stereotypes are cringe-worthy and at nearly two-hours the film feels needlessly slow. It's a real shame that this movie is a mess from a writing stand-point because William Sach's injects a lot of charming Halloween vibes and the film has a very interesting style behind it. It's also working with a cast of very talented people, hell they have not one but two Oscar winning actors in this, Ben Kingsley and Mercedes Ruehl. Both are hammy, but I think set the right fantastical tone of the piece. It also features an early role with cult superstar Katherine Isabelle. It's also worth noting that the Russian stereotype Yuri is played by Jason Fuchs who would later go onto write the screenplay for Wonder Woman (2017). Now, I asked myself if maybe i didn't enjoy the film because clearly I am not the target audience, yet the film is so all over the place and long that I think that kids would start to lose patience with it. The films one saving grace is that it really nails that Halloween season motif and it feels like a mid-90's Disney Halloween Channel film in the best possible way. But, also like a Disney Channel Halloween outing  it has a good production value that is sadly saddled with a muddled unfocused screenplay that sinks any of its charms.

Picture: It looks like this was shot on 35mm. The transfer is good for an older film with very little in the way of artifacts or distortion. Blacks are well balanced as is the skin tones and wardrobe. Colors in some instants could have maybe used an uptick in color but overall the presentation is well handled.

Sound: Spooky House sports a high raising Dolby 5.1 and 2.0 Mono track. The 5.1 offers a more complex soundtrack for those with a home theater system. It's a nice addition with the films heavy use of music and sound effects. Both tracks feature very clear dialogue and sound design.

Extras include a Series of interviews. Kingsley certainly talks the most and explains his connection with the project etc. It's fun to also hear from Mercedes and Kathrine even though they have very little to offer interview wise. Rounding out the features is 8 videos (though you cannot individually select them) and a trailer.