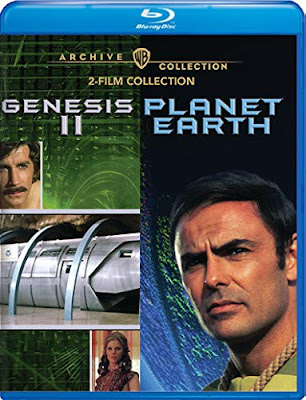 Seven years after the original Star Trek aired it's creator Gene Roddenberry wrote the made-for-television movie Genesis II which has gone onto have something of a small cult following. A scientist named Dylan Hunt (Alex Cord) was routinely frozen but due to an earthquake and is uncovered in the future. Hunt must navigate this stream new planet Earth whilst also going against the evil faction called PAX. If you are a lover of 60's-70's era sci-fi this movie is pretty par for the course. Though I will say that for hooky and silly the film is, it does have some very interesting ideas and concepts that it earnestly dishes out. Much like Trek, Genesis has a moral center and uses the genre as a safe way to talk about other wise touchy or taboo topics. Roddenberry also tackles the subject of gender and more importantly non-binary gender which is very progressive for the time, though sadly its treated more like a punch line in the end, with no deep exploitation into the topic. Though, I will say the gender politics are about as cringe-worthy as you might imagine (Planet Earth is even worse in this regard). Still, this is a pretty fast paced, fun outing with some moments that are so bad their enjoyable.  The cast is great with a post-Addams Family Ted Cassidy who is s truly a sight to behold in his roman-like outfit and of course, Alex Cord has a '70's porn mustache of the Gods. Cord made not be the best actor but his charm and swagger make him a solid lead. Much like Star Trek, Genesis II has grand ideas and world building that sadly has to conform to a small budget. But, unlike Trek it also doesn't have a lot of time to tell what should be an expansive story. Flawed yes? But, I had a very enjoyable time watching this and you cannot help but be in awe seeing Roddenberry gets to flex his boundless imagination. While doing some further research I found that this was actually floated around as a series and its too bad because I think it would have made for an interesting one.

Picture: Warner Archives never ceases to amaze me when it comes to their restorations. For a made-for-tv movie Genesis II looks incredible. The film has a great deal of sharp detail and contrast that I really didn't expect when going in it. If you loved this movie when it first aired and haven't seen it since you are really in for a treat. Any artifacts or scratches have been cleaned up and color tones are balanced nicely.

Sound: Genesis II sports a nice 2.0 track that handles the various sound effects and sound designs very well. There is no hissing or noise distortion and dialogue comes through very clear.

Gene Roddenberry co-wrote Planet Earth using his character Dylan Hunt as a pilot, once again hoping to turn this into a new series. The end result was another made-for-television feature that sadly did not end in getting the series picked up.  Following the events of Genesis II Dylan Hunt (now played by John Saxton) journeys into a strange land where all males are enslaved. Genesis II had some gender politics at play but Planet Earth very much leans heavily on it. To put this in its proper context, the film was released on the small screen at a time when the women's lib movement was in full swing. Women were fitting for basic rights like decent pay, the right to work without being harassed or belittled. The all-women Confederacy is a not so subtle worst-case scenario where women literally dominate men as savage caricatures. Again, all they were fighting for was basic human rights. For me this is the main reason why I feel like it's hard to get on board with this film. It baffles me that Roddenberry co-wrote this, as he seemed to have a lot of progressive ideals. So an entire teleplay devoted to vilifying women is so icky. It punches down when it should be using the sci-fi genre to enlighten and educate not degrade strong women. If you can get past the woefully dated premise the film has some decent action scenes and Saxton is always a win in my book. Ted Cassidy returns and again, its always nice to see him play something besides Lurch. It's also worth noting one of the women in the movie has hair buns that look just like Princess Leia (three years before Star Wars). Overall, I think its a fun outing with some clever writing, but sadly, the premise is uncomfortable to say the least.

Picture: Much like Genesis II, Planet Earth sports a nice clean look with some very vivid sharp details. No shocker from the title but this movie is more outdoor based so we get rich nature shots that look excellent. Again, skin tones and overall colors are very well balanced. No artifacts or distortion to distract.