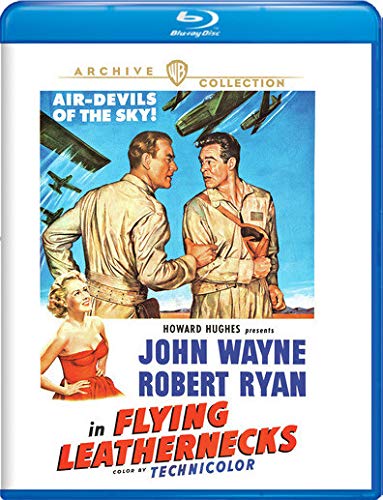 Nicholas Ray's career spanned from the late '40's through the early 1980's yet it truly in the 1950's that he made his mark on cinema. In a Lonely Place (1950),  On Dangerous Ground (1951), The Lusty Men (1952) and of course, probably his most famous film Rebel Without a Cause (1955), all classics. From teen-drama to hard boiled film noir to musicals like Hair (1979), nobody was as versatile as Nicholas Ray. It's why no matter what I'll always check out a movie he directed. That's probably way despite not being a big war film guy, (especially a war film from Hollywood during the 40's-50's) I wanted to see this film. I think my biggest issue with these movies is they, for the most part act more like recruitment films rather than a thoughtful exploration on the horrors of war and the complexities therein. Major Kirby (John Wayne) is sent in to whip the Wildcat squadron into shape. Tensions begin with Kirby and the men, as well as with Captain Griffin (Robert Ryan). The men are able to come together for the historic World War II battle of Guadalcanal.

It's interesting that this movie is set in WWII yet made/released during the Korean war. As I thought the film is very black and white, not in term of the picture, which is in Technicolor, but rather the enemy is evil and us, the Americans are the last hope for glory. Yet, it actually has more depth in terms of character and how it does in some degree depict the horror that is war.

Ray subtly brings some complexity to both Kirby and Griffin and I think it was wise to try and inject some humanity into them. Speaking of which the acting is truly what makes this film. While, as I said its not a bad film, and Ray certainly does his best to help elevate it from your typical flag waving war film, but its Ryan and Wayne that make the movie. Apparently Ryan and Wayne were very different in terms of politics and, honestly it may have helped add this sense of palpable on screen tension.  Add some great action set-pieces and a go-get'em score by the famed composer Roy Webb and photography by William Snyder (Creature from the Black Lagoon) and you got a pretty decent film. On the down side: Its hooky and the intermixing of stock footage is jarring,  the slurs on the Japanese are very uncomfortable but, it's story is solid with a fantastic core cast and alot of wonderful character actors in smaller supporting roles. 1951 was a fantastic year for films: Strangers on a Train, The Thing From Another World (also released by RKO) and The Day the Earth Stood Still and Flying Leathernecks is certainly not the best or most memorable one, but it is worth checking out nonetheless.

The picture looks fantastic. The new transfer highlights the great action set-pieces filmed in all of its glorious Technicolor splendor. Grain is kept to a minimal and skin tones look natural. Colors really pop and are for the most part stable and sustained throughout. The sound is also great with no hiss or background distortion. Dialogue and sound effects (especially for a war film) is done quite well. The disc includes the re-issue trailer as a bonus. Overall its a fairly good film and despite its issues and some aspects not aging very well I was entertained.