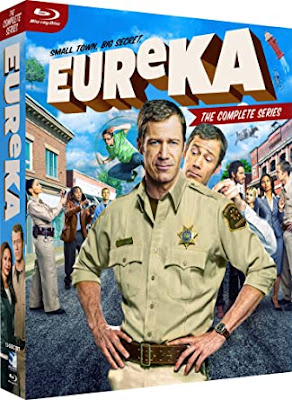 Eureka which ran for an impressive five season run was a mega-hit for Sci-Fi Channel (now SyFy) and, despite all the praise and commercials I sadly never got on the band-wagon when it originally ran. But, thanks to Mill Creek Entertainment I can re-visit the entire series in HD. And just in time for self-isolation where we all have nothing better to do. A US Marshall named Jack Carter (Colin Ferguson) accidentally finds himself in a quirky little hamlet called Eureka. He soon finds himself as a sheriff, encountering strange people and even stranger problems in Americans Smartest Town. The pilot episode really does a solid job at totally absorbing you into the world Andrew Cosby and Jaime Paglia have created. It’s very brilliant to introduce us to Jack Carter, a stand in for the audience, as he is experiencing all the craziness. I think I was impressed by how easily the writers not only set-up this brand-new world but truly bring it to life with rich characters. The plot is ever unfolding and, if you think that the pilot is a casual lead in, it is not. You have to pay serious attention as the pace is nearly break neck and it lays a lot of information onto its audience. My first impression besides the great cast, wonderful characters is how it feels very much like Men in Black (1997) where a person discovers a strange world lying just underneath our own. This is one of those rare series that, for seemed to get better as the series went on. Sure, there are some uneven seasons but Cosby and Paglia do an amazing job at world building, crafting interesting characters with story lines that are wildly entertaining. If you have not seen this series yet, now is the perfect time to binge all five seasons!

Season One Disc One: Commentary on Pilot with Andrew Cosby, Jaime Paglia and Colin Ferguson. A second solo track with actor Colin Ferguson is also included.

Made in Eureka Infomercials

Outtakes: Once in a Lifetime w/commentary by Andrew Cosby, Jamie Paglia and Colin Ferguson

Happening Around Town, The Second Season: explores the growth of story and characters from season one to season two.

SciFi.com Webcasts: A fun vintage behind the scenes webseries. It also includes Colin Ferguson doing a Q&A at Comic Con

Deleted Scenes: E=MC?, Sight Unseen, God is in the Details and All that Glitters

Inside the Writers Room: A look inside the writers room.

Episode: I Do Over w/ Charlie Craig and episode writer Thania St John

Deleted Scenes Bad to the Drone, What About Bob?, Best in Faux, I Do Over, Show me the Mummy and Phased and Confused

Audio Commentary: Episode: Your Face or Mine? w/ Jamie Paglia and Colin Ferguson

Deleted Scenes: Here Comes the Sun, From Fear to Eternity, Welcome Back, Carter, Your Face or Mine?, Insane in the P-Brain, Its Not Easy Being Green

Creating a Musical Personality: Composer Bear McCreary gives us a look inside creating the music for Eureka.

Deleted Scenes: If You Build It, Ship Happens, Shower the People, Have an Ice Day,What Goes Around, Comes Around

Finishing Touches: The Visual Effects of Eureka: A look inside the visual effects of the show.

Deleted Scenes: Founders Day, A New World, All the Rage, The Story of 02, Crossing Over, Monstrosity and Stoned

In the Beginning Camp Eureka: A fun look inside building a 1947 version of the town of Eureka for the episode Founders Day.

Deleted Scenes: I'll Be Seeing You, Liftoff, Reprise, Glimpse, Up in the Air

The Mythology of Eureka: A deep dive into the films time-travel story line.

Deleted Scenes: Omega Girls, Clash of the Titans, This One time at Space Camp, One Small Step..., One Giant Leap

Anatomy of a Episode: Jack of All Trades: Explores the making of an episode with key creators, crew and actors.

Ode to Carl the Jeep: A quirky salute to the ill fated jeeps in Eureka.

This Song is on the House: A look at Tally Deushanes song about a smart house, love and robots.

A Fond Farewell: A fitting goodbye to the series with Jamie Paglia and key crew.

Overall: As you can see Mill Creek has provided a TON of features. Rarely do I see so much content for a series, and with newer series you`ll be lucky if you get a gag reel or hell anything for that matter. I think that if you are a huge fan of the series this will be a big selling point over all. I really loved the vintage webseries and all the fun weird little promo stuff that was included. It series is over ten years old but still has a lot of charm and engaging story-lines. If you are on the fence I would say nows a good time to pull the trigger as the series is 32.99 on Amazon. For everything that you get, thats a real steal.