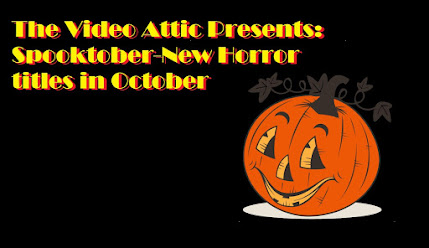 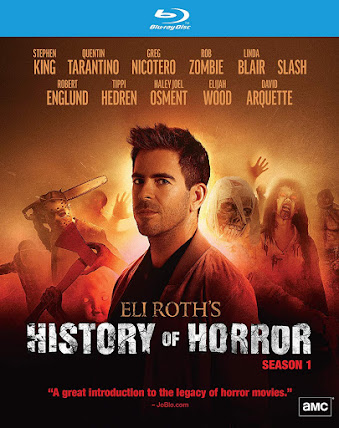 AMC's Eli Roth's History of Horror comes just in time for the Halloween season. Horror films have a rich history that draws from folklore, social, political issues, religious ideology etc.  Despite what some snobby film scholars/critics might have you believe the genre is a fantastic template to highlight societal fears and anxieties. The set up is very simple: Eli Roth hosts this 7 part series with each episode explores a different genre such as Zombies, Slashers and Demons etc. Episodes are around 40 minutes long and I was impressed with the great cross section of interview subjects. From authors, film scholars, filmmakers, special effects artists, actors, it really gives you such a complete picture. You even have thee Stephen King giving a rare interview and its insanely interesting to hear his thoughts on horror movies. Other highlights include: Joe Hill, Roger Corman, Stuart Gordon, Rob Zombie, Quentin Tarantino, Jamie Lee Curtis etc. Also featuring vintage interviews with George A. Romero, Alfred Hitchcock and others.

I think the biggest question is, will all fans enjoy this? Hardcore horror scholars and fan's may not gleam any new information from this series yet, speaking as someone who is a historian and an uber fan, I still really enjoyed this series. Of course, I think that this series is perfect for those budding horror fan's just coming into the genre. It's basically like taking a film course on horror film 101 in one cool set. Again, I think what I loved most about this series is the wide range of thought provoking points of view and, AMC's ability to get some huge names in the horror business. Thankfully a season 2 will premier October 10th of this year on AMC and Shudder.

Currently streaming on Shudder and coming to Home Video October 6th, now's the perfect time to check out this series. Even as a hardcore horror fan I enjoyed