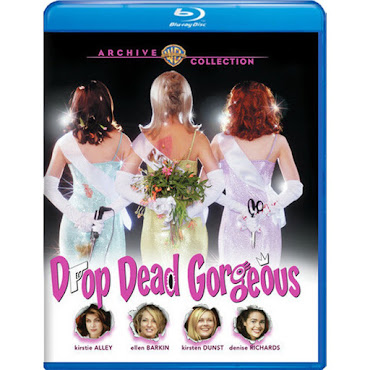 Michael Patrick Jann isn't a household name but he has been working steadily (primarily in television) from the early '90's  to today with familiar credits including Reno 911, The State, The Goldberg's, just to name a few. 1999's Drop Dead Gorgeous is, to date, his only theatrical feature film credit and a cult classic. To the best of my knowledge the DVD version was out of print but rejoice, it's coming to HD this October from Warner Archives.  Set in 1995 a documentary crew captures the quirky going's on of a Minnesota beauty pageant in all its messed up glory. Michael Patrick Jann made this film early in his career and it was clear that he wanted to make a big bold statement. The result is a movie that is very nearly brilliant but sadly, it just misses the mark. When you boil it down, Jann essentially makes a Christopher Guest style movie which is brimming full of quirky underdog characters in the Midwest and done in a documentary style. Think, Waiting for Guffman (1996), minus the genius of Guest and company. There is no doubt that this film is a dark comedy with some very touchy subjects being gleefully made fun of, such as eating disorders and teen pregnancies, whilst also taking a sardonic view of gun-nut culture and religious zealots. There are parts of this film that are truly gut busting in terms of laughter but, where some of the jokes land, others fall flat. The issue is a lot of the jokes feel like they are punching down and the result is some very lazy and  cringe-worthy humor. For example, there is weirdly out of place bit about an Asian American couple that is clearly the butt of the joke and speak in a uncomfortable broken English accent. Apparently even at the time some of the crew found the material too offensive.  Denise Richards recently revealed in a June 2020 interview with PeopleTV's Couch Surfing that crew members walked off during her number 'Cant Take My Eye's Off of You' whilst dancing and singing to a prop of Jesus. You also have MadTV's Will Sasso playing a cognitively impaired person who gets called a name that starts with r, countless times.

This is why, by in large Guest movies age incredible well. This is because Guest's humor is more about the razor sharp wit and uncanny ability to create memorable characters, but Jann's film doesn't age very well because he takes lazy stereotypes and crafts the humor our that. It's a shame because I think it sinks any of the actually really clever humor Jann injects into this film. On a bright note the film is PACKED with exciting rising stars such as Amy Adams (in her film debt), Kristen Dunst, Denise Richards, Brittney Murphy and established stars like Kristy Alley, Allison Janney, , Ellen Barkin and character actors like Mindy Sterling, Sam McMurray, Matt Malloy, Michael McShane and even Adam West as himself. While the film is handled well by the bulk of its legendary cast, some of the younger actors struggle with their Midwest accents and Richards doesn't have one at all for some reason.

Drop Dead Gorgeous has a little something to offend everybody, but  I dont think it nearly works well enough to be true biting satire, with some  jokes coming off uninspired, crass and uncomfortable. To the directors credit there is some true nuggets of pitch black comedy gold and, I found myself laughing out loud at times. Sadly though, you have to wade through some inconsistent b-material that feels like it could have used a tighter narrative, and as I said the film isn't nearly as funny as Jann thinks it is at times. As I say it wants so badly to be Guest movie but doesn't quite have the strong screenplay to pull it altogether. I know this movie has its loyal fans and it's not that I dont see the merit in it, just that it could have been better.

Picture: Drop Dead Gorgeous has a noticeable upgrade from its previous DVD release with an incredible vibrate color palate. You can tell this was taken from 35mm print as the film has some graininess which is thankfully consistent throughout. There is a few blurring moments but nothing that would probably be noticeable unless you we're looking for it. Overall this is a nice looking film that turned 21 this summer.

Sound: DDG sports a nice DTS 5.1 track which has a robust sound quality. Dialogue and sound design comes through well and those with a sound system carries most of its sound in the front speakers.