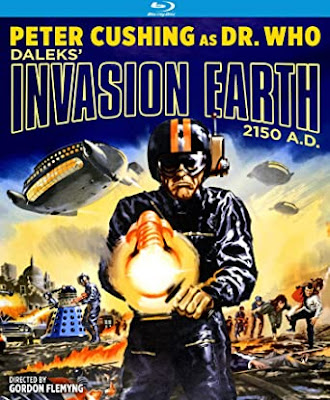 Kino Studio Classics brings us yet another Dr. Who film, the sequel to Doctor Who and the Daleks (1965). Both films were directed by Gordon Flemyng. If you have never heard of Flemyng you`d be forgiven as he seems to have worked mostly in British television, with only a handful of feature films to his credit. With Dr. Who having a huge cult following its safe to say these two movies are what hes most known for.    The time traveling Doctor Who (Peter Cushing) and crew must battle the fiendish mental machines known as the dalek's as they take over London.

As I mentioned in my review for the previous film  Doctor Who and the Daleks I am the first to admit I am not a die hard fan of the original British series, nor am I terribly knowledgeable about the series various story lines and lore. But, despite that I though that Doctor Who and the Daleks was a fun enough outing. Goofy, far out and and enjoyable overall. As far as sequels go, Invasion thankful also leans in on the silly and very campy aspects that I so loved about the first film. This time around the tone tries for a more serious gritty tone but its clear that Flemyng knows this is high fantasy and wisely embraces the absurd elements. Yes, its not a brilliant plot and the film tries for some humor that feels awkward. Tone wise its kind of jarring with the real world grit of murder and destruction living side by side with the colorful ultra weird. If you are willing to embrace it's flaws though, it makes for a mindless enjoyable watch. It's well made overall, and I think even the crafty home made sets only add to its B-film charms. Again, I think that the key to getting anything out of both films is if you like cheesy films or not. The cast is great and wisely everybody plays things are deadly serious and without any winks to the camera.  Cushing returns as the lovable Doctor and, like the first film plays it with the right amount of earnestness without every going full ham. It's also nice to see Roberta Tovey returns as the Doctors granddaughter Susan. Reportedly a big part of getting Cushing to return was that Roberta also be re-hired to again play his granddaughter. I liked this element and helps give Peter's Who a personal relatable touch. For genre fans they will spot a lot of familiar faces in the supporting cast with Andrew Keir (Quatermass and the Pit), Bernard Cribbins (Frenzy), Godfrey Quigley (A Clockwork Orange) etc. At the time I watched this for my review it was a lazy Sunday morning and, this is certainly one of those, mindless weekend movies you watch when you want to switch the old brain pan off. Not as over-the-top as the previous outing but still retains the same campy charm and B-serial goodness.

Kino Studio Classics transfer of Dalek's Invasion of Earth is really well done. The colors are handled extremely well. Skin tones look natural and darkly lit scenes great benefit from this new print. There are a few cases of some blurring but nothing that distracting. Small details in the production design really did leap out with this sharp clear picture. You can also tell that a lot of time went into scrubbing the picture of any artifacts or scratches. Sound is great as well with a healthy Mono track. Dialogue comes through nice and clear, as does the sound design.

The disc is also loaded with fun extras. The film contains a running length commentary track by historians Kim Newman, Mark Gatiss and Robert Sherman. The track is lively and informative with no lulls in conversation.

Daleka mania a 57min Documentary (also included in the previous Who film) which I believe was ported over from Anchor Bay from the late '90's. Also included is a interview with Author Gareth Owen and actor Bernard Cribbins. Rounding out the features is a nice featurette called Restoring Dalek's Invasion Earth 2150 A.D. They did a similar feature for the other Who film released by Kino and its nice that fans get a glimpse into what goes into restoring films such as Invasion. Overall a nice looking and sounding film with a lot of great extras. A Must Buy for Sci-Fi fans.