Cruel Jaws (1995) AKA Jaws 5 Makes its US Debut from Severin! Blu Ray Review 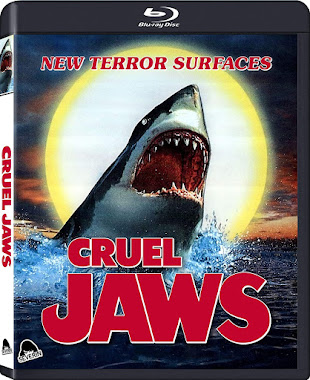 Cruel Jaws...The shark film that infamously was sued by Universal for using stock footage from both Jaws (1975) and Jaws 2 (1978). It's a film that has had a pretty checked past in terms of a US home video release with many settling for bad bootleg copies in order to actually see the film. In 2015 Scream Factory had planned to do Cruel Jaws as a double feature alongside Exterminators of the Year 3000 (1983) but sadly, due to the studio footage used contained in the film they had to pull its release. Now, five years later in 2020 Severin will be officially unleashing the film on 1080p.   This seems rather fitting as Severin has released a ton of other Bruno Mattei films such as The Other Hell (1981), Shocking Dark (1989), Robo Wars (1988), Zombi 3 (1988), Night Killer (1990), Violence in a Women's Prison (1982). The films about a  great white shark is stalking and killing a small island community with a mayor that isn't about to close for the summer. As the bodies pile up only a motely crew including an officer and a shark expert believe them.  Hmm...Sounds familiar.

In terms of rip-off Nature-Run-Amok/Killer Shark movies that came in the wake of Jaws, Cruel Jaws is possibly the most blatant in copying the famous '75 Stephen Spielberg blockbuster. (Again it even stole footage from it) And damn if it isn't a lot of fun. When you pop in a Bruno Mattei movie you pretty much know what your gonna get. Bad over-acting, check! Guns and mayhem check, Done on a dime production value, double check, lots of t&a triple check. I love Cruel Jaws, because like a lot Mattie it's high energy shlock that is of course so earnest in its silly plot that it enters that sweet spot of so-bad-its-enjoyable. Characters belt out hilarious lines like "Were gonna need a bigger Helicopter" or, "The tiger shark we're looking for is a homicidal maniac"  like they were in some Howard Hawk epic. To Bruno Mattei's credit the film clips at a fairly good pace and has enough gore, and beach bods and on display to gloss over the fact that virtually every aspect of the film. From its acting, production, very funny heavy handed message the film shoe horns in not to mention the crazy sub-plots (which I won't spoil for those new to this film) it's a mess that at least swings big. Of course it's these crazy touches that make this endlessly watchable. And listen for that not so subtle riff on John Williams famous Jaws score (changed just-enough), as well as the Star Wars Fan fare score (again changed just enough). Cruel Jaws is a movie that every harden Grindhouse fan needs to see like a rite of passage.

Picture: Severin comes out swinging in this HD presentation. I think for what Severin had to work with the transfer is very well done. It's not perfect but it's way better than what I think anybody is expecting. The colors are vivid, skin tones look natural and grain is consistent and well handled. Night scenes and unwater scenes are noticeably clearer. It's a small miracle this film is getting any release let alone a nice HD one at that so, I am extremely happy with how this looks.

Sound: Cruel Jaws is presented in a 2.0 Mono track. Thankfully there is no hiss or background distortion with dialogue such as it is, and sound design coming through beautifully. It's in my opinion a very strong soundtrack that shows off the film well.

Cuts/Extras: Severin goes ALL OUT for their releases and Cruel Jaws is no expectation. The film includes two cuts of the film: The Mattei Cut (Home Video Version) and the Snyder Cut (a very funny nod to Zach Snyder's infamous fan demanded cut of Justice League for those living under a rock). The Mattei Cut runs at 94 mins and the Snyder Cut at 96mins. I dont want to spoil the difference in the cuts so I'll let you discover that for yourselves.

The Great White Way A Study in Sharksploitation with Rebeca McKendry. (20mins) Rebecca is a LEGEND in the field of historians that deal in genre fare and is also a filmmaker in her own right. I loved this feature and it's such a gem in this set. Clearly she knows what she's talking about and it's an engrossing overview of this sub-genre that I find very fascinating.  Also finally someone talks about Frankenfish (2004), a film I proudly own. #JusticeforFrankenfish. Really fantastic work!

These Things Got Made! An interview with Actor Jay Colligan. (12min) A lively interview with Jay Colligan who played Tommy in the film. I love these super rare interviews and,  as silly as it sounds I think it makes for an important artifact to have on the record for future film scholars and fans alike.

Overall: Severin Films is such an exciting label because they arent afraid to release masterpieces like Blood on Satan's Claw (1971) along side rare shlock fests like Cruel Jaws. And both get equal treatment which is a very cool thing indeed.

Cruel Jaws is the Mt. Rushmore of rip-off films and a must see. Thankfully you wont need a bigger wallet as its nicely priced! Check it out!