Beetlejuice and The Goonies: Two 80's Favorites on UHD This September 1st from Warner Bros.

Disney made headlines when it announced it will no longer be doing UHD home video releases. That is tragic but I am thankful that big studios like Warner Brothers are keeping up with the times. They have re-released Beetlejuice (1988) and The Goonies (1985). But you know, not to get too misty eyed about it but both films were deeply important to me. The Goonies (released the year I was born) was such a fun comfort movie and, as somebody with a big imagination it was the perfect outlet for me. Beetlejuice was an early VHS we had and it was my window into the spooky high-concept world of Tim Burton. It's also worth noting that at the time the Beetlejuice television was also airing, and again, I was firmly transfixed in that beautiful nightmare world. I am beyond excited to review both films and also let you know if they are worth upgrading. I'll be doing a short review- normally I do a more in depth dive into the films but since these have been discussed and written about to near death i`ll keep it brief. I'm also skipping the plot summary if you probably all have seen these movies or at least have a good idea what they are about.
The Goonies (1985)
Directed By: Richard Donner
Starring: Josh Brolin, Sean Astin, Corey Feldman, Jeff Cohen, Keri Green, Ke Huy Quan 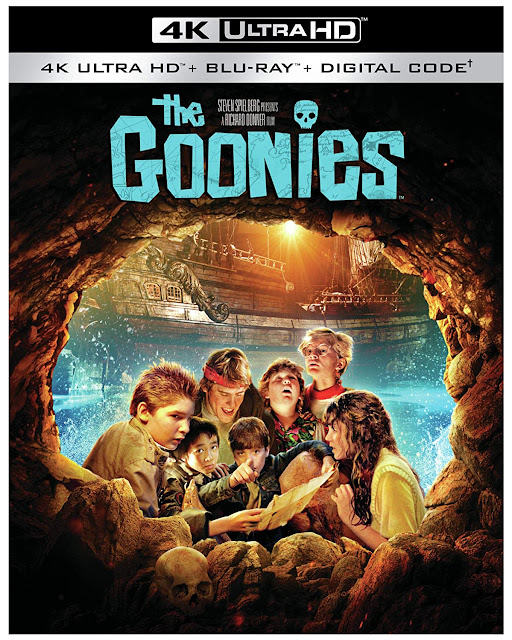 Richard Donner was a hit maker and even his lesser successful films have gone on to earn cult status. Superman (1978), Lethal Weapon (1987), Scrooged (1988) I could go on and on.  But, Goonies from 1985 is maybe his most cherished film. And its beloved for a reason. Not only does the film perfectly capture the awe and wonder of being a kid, they get to be the ones going on the grand adventure. Think Indiana Jones, yet instead of the famed explorer its you and your friends. Mix in a smart screenplay by Chris Columbus at his creative peak (based on a story by Stephen Spielberg) and a fantastic cast and you got the makings for a instant classic.
HD: The HD version is a step up from the DVD. Though, I will say there is some issues with inconsistent color grading and some blurring. Having said that this is in my opinion much better than the previous HD edition and for that matter alone is worth the upgrade. The colors are more vivid and that really helps the darker lit moments (to a degree).
UHD: Here we get a HDR-10 . Again the film is better color wise but has more deep blacks which can be an issue with a film that has a lot of darkly lit scenes. Overall good, not great and has a slight edge over the HD version in regards to a clearer sharper image.
Audio wise Goonies has a DTS-HD track. Purest like myself would have wanted an ATMOS track. Dialogue comes in clear but can be a bit inconsistent at times. Perfectly, fine serviceable, not mind blowing but does the job.
Beetlejuice (1988)
Directed By: Tim Burton
Starring: Michael Keaton, Geena Davis, Catherine O'Hara, Alec Baldwin, Winona Ryder 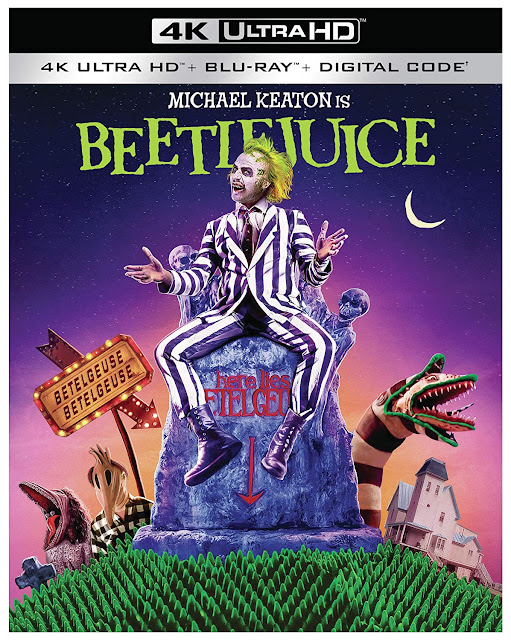 Beetlejuice is a among a handful of films that made a huge impact on my early film education. I had it on VHS and I watched our families original copy so much the tape wore out. It not only introduced me to high-concept horror/comedy but also the off-beat world of Tim Burton. Other Burton movies I was obsessed with was Batman Returns (1992) and later on Mars Attacks (1996). But, Beetlejuice was the first Burton movie I ever saw and therefore it holds the strongest place in my heart.
HD: The HD version is certainly a leap from the DVD in terms of clarity and and richness in quality. If you already own the 2008 Blu Ray, comparing the two it looks like the same transfer used. This isnt a complaint as that was a well done undertaking and such an improvement over the old DVD version.
UHD: Wow! I gotta say that this new transfer for the UHD is fantastic.  I have seen this movie dozens of times and, honestly was  a revelation on UHD. The HDR is working very well with this movie, highlighting the films colors in a way that feels true to the feel of the films quirky off-beat world.  This new print is so many rich and vivid details. For example, you can truly see all the work in Keatons costume, makeup and hair as well as the strange even downright surreal at times production design. It's all celebrated here. Audio wise we get a stunning Dolby ATMOS is great. This has a 5.1 track and on the UHD the sound is amazing. With those with a good home theater sound system, you`ll notice how alive and realistic it sounds. I know other reviews will probably mention this but I cant think of a better example, the buzzing sound at the start of the film is crazy in just how real it is space wise from one speaker to the next.
Features: Three Beetlejuice Cartoon Episodes and a Trailer. Sadly, no new features are included.
Overall: This is a must own. If you are a fan of this film and only have the DVD or the 2008 Blu Ray its well worth upgrading for the UHD disc. If you dont know this in any format there is no question that you should pick this up ASAP. I dont foresee this movie looking better any time soon.
Final Thoughts: While Beetlejuice is better in terms of visuals/sound both it and The Goonies are incredible leaps forward in terms of physical media. If you love these movies you should run out at buy these because despite some flaws they still are damn impressive in my opinion. Both run about 24.99 retail wise and for two discs thats a great deal. Both sets also include Deluxe editions, which features some cool extras in terms of stuff (not extras in terms of disc or bonus features). These deluxe editions retail for 49.99 on Amazon and is worth it if you are a die-hard fan. But, for my money either option is a winner. 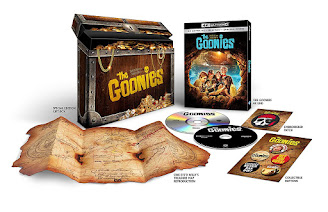 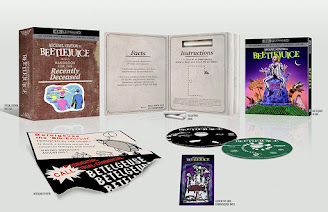