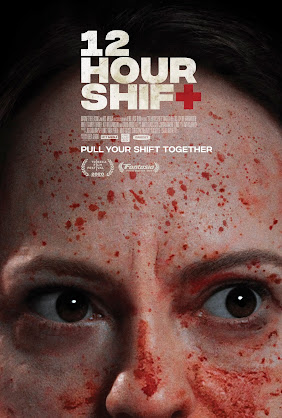 It's 1998 and over the course of one night at an Arkansas hospital, a junkie nurse, her scheming cousin and a group of black market organ-trading criminals get caught up in a heist gone wrong.

12 Hour Shift is only the second feature film from Brea Grant and even at such an early stage her in career she shows a a lot of maturity film wise. Wisely Grant fore-go's any back story but rather positions us the audience at the start of our Mandy's chaotic shift. It's smart from an economic stand point not only in terms of budget also also economical storytelling. We really get all the information we need and the rest we can fill in from context. Visually the film is great with nice use of tracking shots but also hand-cams that capture all the crazy going on's.

Now, I have not seen Brea Grant's previous feature film nor her shorts but I wager that she enjoys relishing in the absurd. And, boy oh boy this film is a crazy boarding on surreal trip. This insanity, for the most part bleeds nicely into Grants  pitch black, sardonic screenplay. If I had to make a complaint the script could use a tighter focus. Grant sadly gets carried away with scenes that dont further the plot but bogs its already lean 86 minute runtime.  Chloe's character having a slow-mo Cheeto fight with her boyfriend might be visually interesting to watch but it doesn't service the narrative. Angela Bettis known for indie hits like May (2002) and Girl Interrupted (1999) truly shines in the lead. Bettis is such an exciting actor and she easily does the heavy lifting in the cast. Otherwise the acting is a bit on the inconsistent side with some performances that range from great to wooden. Highlights including Mick Foley who is actually really entertaining in his small but memorable role and David Arquette who seems to be off in his very own movie.

12 Hour Shift is a movie that is good but you can certainly see the cracks in a screenplay that is way more self indulgent for its own good. This is a shame because I think the core concept is one with enough meat on it to really sink your teeth into. It's very nearly there it just needs an overhaul in the screenplay department. Flawed yes, but I was still entertained because the film manages to maintain its insane premise and the momentum it builds throughout. And, whatever you may think of the film you have to give Brea credit for swinging big and trying for something wholly different and fresh.