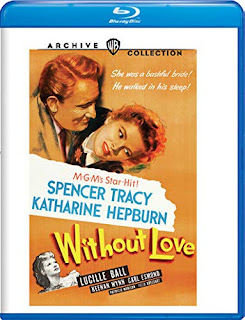 The pairing of Spencer Tracy and Katherine Hepburn is nothing short of legendary. Warner has re-released not one but two HD films with the duo. Without Love tells the story of a DC scientist Pat Jamieson (Spencer Tracy) who vows to never marry and focus solely on his work. He finds his way into being the caretaker in a large home owned by Jamie (Katherine Hepburn). Jamie lost her husband in a tragic accident and also doesn't want love in her life. The two decide to marry out of convenience and spend their time working on a secret military project. Also, Pat sleepwalks.

I haven't seen all of the Tracy/Hepburn films and this one was new to me. Sadly, I dont think Without Love works nearly as well as something like Adam's Rib (1949) or Pat and Mike (1952) both written by legendary Oscar winning actor Ruth Gordon. It's a shame because it has all the trappings of a great film. Not only are Hepburn and Tracy in top form in this but, the supporting cast is incredible (more on that later). So, why doesn't it work? I think for me it comes down to the directing and screenplay. Now, Barry is by no means a bad screenwriter. In fact, he wrote The Philadelphia Story (1940) and Holiday (1938) two classics and my personal favorite films of the Golden Age of Hollywood. While Barry's dialogue has the same crackle and pop as his other works its the concept that is lacking. The entire main thrust of the film felt a bit forced and this idea of the two marrying out of convenience didn't really make a lot of sense. To its credit, the film does do an OK job at making it somewhat believable. But, it feels like the filmmakers have to work extra hard to make the set-up work. Then there is Pat sleepwalking. The film makes a pretty big deal about this and its so strange because it doesn't add anything very funny nor does Barry use it for some big pay off later on. There is also a sub plot with Lucille's character Kitty that also goes nowhere. I'm glad Lucille's in this movie but it never adds to Pat and Jamie's story. It felt like the filmmakers were trying to take a thin premise and stretch it out. This brings me to my other issue-the length. Without Love clocks in at nearly two-hours when a lean ninety min. would have been fine. What saves the movie entirely is of course Hepburn and Tracy who are always great together. It also includes a meaty pre-I Love Lucy role for Lucille Ball. Keenan Wynn (who Ball said was her favorite actor) is also delightful in the film. The film is also notable for being an early film for Gloria Graham who would go onto win an Oscar. Legendary photographer Karl Freud gives the film a nice scope. Funny enough, he would team up with Lucille Ball again, shooting the bulk of her television show I Love Lucy. I wonder if she was impressed with Karl's work on this film and later hired him for her show.

Despite its flaws I think its impossible for me to out right hate this movie. In fact, I think its a very re-watchable outing. It's gun-ho patriotism might be dated but part of the films charm and its actors all spellbinding performances.

Warner provides a wonderful looking transfer that complements and highlights Freud's cinematography. All dirt and artifacts have been scrubbed and what we are left with is a clear and rich picture. The sound is equally great with no background hiss. Dialogue come through loud and clear and highlights the underrated musical work of Bronislau Kaper (Mutiny on the Bounty). The extras include a amusing vintage crime does not pay short by the Purity Squad. A classic cartoon is also included entitled: Swing Swift Cinderella. Rounding out the features is a trailer for the film.

Tracy and Hepburn leap off the screen in this dazzling new re-release! Fans of classic Hollywood films should not be without Without Love.


This is one of two new Tracy, Hepburn re-releases and I hope Warner re-releases more on Blu Ray!