Those Who Deserve to Die (2019) Kino Blu Ray Review 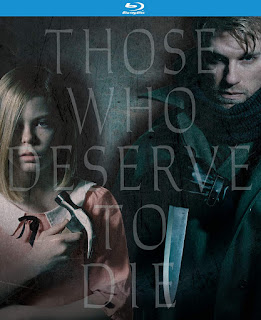 Bret Wood may not be a household name but, I credit him greatly for opening my cinematic world up with his documentaries Lon Chaney: Behind the Mask (1996) and Kingdom of Shadows (1998) whilst I was in my formative years as a film fan. I implore you to find those and check them out. Wood works for Kino but still directs films. His latest 2019's  Those Who Deserves to Die is coming out Aug 18th. Jonathan (Joe Sykes) is a vet that narrowly escaped a horrific fate while I prisoner of war. Hes coming home only to find that he has a score to settle with the corruption in the town.

Wood wastes zero time in setting the films grisly tone. Right away I understood that this revenge-thriller is modeled after Italian Giallo's both in its style and black gloved, razor wielding killer. The little girl featured heavily is also a nice homage to Bava's seminal Kill, Baby...Kill (1966).  While the film unfolds a decent mystery, I think the writing could have used maybe a bit more polish. Some of the plot seems like it could have used fleshing out better. Still, I thought the feel had a great look and feel of a 60's-'70's era Giallo and its what kept me invested. The level of violence is intense and may shock even the most hardened genre fan. Like, I am jaded as hell but I was even taken aback. Wood swings big and I think that is the right move. After all, the film is pastiche of grimy Grindhouse fare and it seems like something Fulci would have done. The cast is great with leads Joe Sykes (V/H/S)  and Rachel Frawley giving solid performances. Cult goddess Lynn Lowry is fantastic as Justice Merrill and I think she dazzles in every scene shes in. Its very clear the Bret knows who to construct a film and Those Who Deserve to Die is wells shot, edited with a mood that is palpable.  Woods latest film is a serviceable revenge, Giallo homage that, while, could have used some tightening narrative wise, I enjoyed it nonetheless.

Kino's print looks great and since the film was shot on digital the picture of course has a nice clarity on HD. The sound is also great featuring a  very nice Goblin inspired score. This includes a nice array of extras including deleted scenes, trailers and a series of short films: Malice of Alice, Secruity and a promo short film.