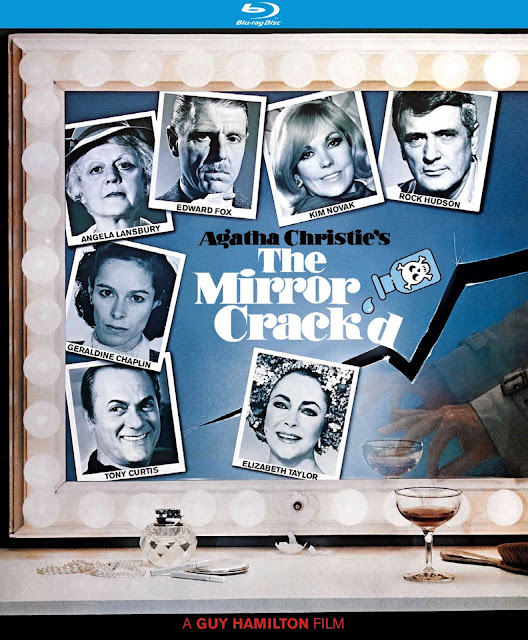 Knives Out (2019) is a return to form of the star studded murder mystery film, and also the 'cozy mysteries' famously associated with the writer Agatha Christie. Yet, Hollywood has been doing these for decades before Rian Johnson's hit outing.  Point in case three new Kino Studio Classic releases: Death on the Nile (1978), Evil Under the Sun (1982) and, the movie I'll be reviewing The Mirror Crack'd (1980). Now, I have not read the book in which this is based, so I wont be making any comparisons. Just strictly will be only talking about the film version. A local girl from a beautiful rural town in Britain is murdered after a Hollywood production blows into town.  With it, two rival actors Lola Brewster (Kim Novak) and Maria (Elizabeth Taylor) a director Jason (Rock Hudson) and producer Martin Fenn (Tony Curtis). Legendary sleuth Miss Marple (Angela Lansbury) must solve now solve the case. First off, let me say that I love big budget murder-mysteries with grand stars-yet its probably not my favorite of its ilk. It's kind of how I feel about the bygone era of big disater movies with big stars shoved in their for maximum box-office returns. Shallow and attention getting sure, but also pretty fun most of the time. However I dont know if this film worked for me.

But, let me start with the positives. The cast. I mean, what can you say about such a talented group of people. Lansbury, Taylor, Hudson, Curtis and Novak  all totally shine in their respective roles. Rumor had it Natalie Wood was suppose to play Elizabeth Taylor's role and, as much as I love Wood, Taylor, playing a bitchy fierce Hollywood star wanting to make a come back, is perfect. And Taylor delivers a layered and interesting performance. You cannot help but love seeing Elizabeth Taylor and Kim Novak (Vertigo) playing rivals and its clear they are both loving the role.

Tony Curtis and Rock Hudson are also terrific. But, of course there's Angela Lansbury who is aged up to play the elderly Miss Marple (she was only in her fifties at the time). Though Lansbury said she loved playing the fictional Miss Marple she didnt care for this film. What works about the film is its meta-commentary on Hollywood, but also cultural clashes between the lower and upper class Brits and the American's making movies. And, there is so really fun bitchy, catty moments that make it a fun watch. And as a Dynasty like film, showcasing rich people behaving badly and having catty fights it works wonderfully. But as a mystery film...Not so much. My main issue is there are very little clues or hints given to us the audience, making the 'big reveal' kind of a let down. It doesnt help that the entire affair feels bloated at nearly an hour and 50 minutes. There are scenes that, while yes entertaining, doesn't move the plot forward. I saw this first and then Death on the Nile, and by far Nile is the superior film in my opinion. That film has very little to no filler, whilst Mirror, feels like mostly filler and a splattering of mystery thrown in, because remember this is a murder mystery. Again, its hard to outright hate the film, especially with the Hollywood aspect and Taylor and Novak playing versions of themselves, but a compelling and satisfying murder mystery it does not make. I will say that, again without spoiling it the reveal is clever, but ahhh...not clever enough to have an entire movie built around it. Ironically it would have worked better as a Murder She Wrote episode. For those of you how are not aware, the series and the fiction character which made Lansbury a mainstream star (she was already well known in the theater crowd) Murder, She Wrote (1984-96) was partly based off the Miss Marple character and, in fact the series title is a fun play on the Marple mystery Murder, She Said.. But yeah, there isn't enough here to justify an entire nearly two-hour film, even though, as I said its entertaining, just not as a mystery per se.

The film looks great and the transfer makes the most of the directors use of beautiful sprawling locales and big bold colors. Like, the costumes within the fictional movie is just as lavish and grand looking as you might expect a rare big budget period film and they nearly leaped out in this print. The sound is great as well and showcases a score by John Cameron to great effect. Dialogue and sound designs some through crystal clear. The features include a commentary track by historians Howard S. Berger, Steve Mitchell and Nathaniel Thompson. The track is lively and is filled with some great information on the production, the background of the actors and director etc. At times it is just the three gushing about the film but theres enough well researched material to make that forgivable. Well done!! Rounding out the features is trailers and TV Spots.