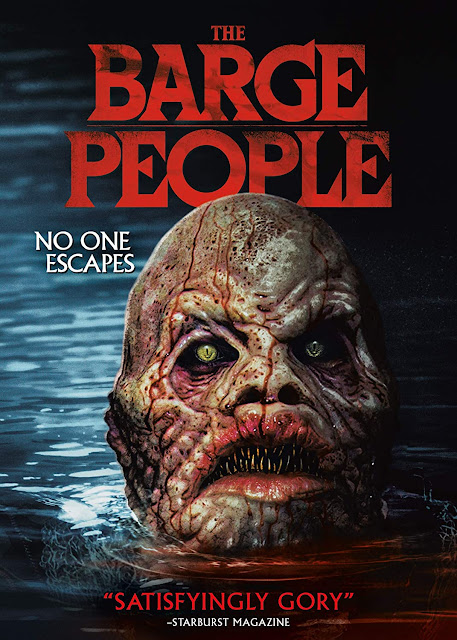 Two sisters and their boyfriends go off on whats suppose to be a fun holiday to the British countryside. Though, because this is a horror movie their time is anything but peaceful and idyllic. What they find is hideous creatures that thirst for human blood. So, basically anytime you see a really cool cover, most likely means the movie is probably not that good. Hey, thats just video renting 101 from back in the day. I should know better but I decided to go ahead and check out this movie anyways. Oh boy, what a mistake that was. The Barge People starts out promising with a pretty good and effective opening scene explaining the disappearances in the British countryside's canals. It's set up a nice mystery element and I thought, "Oh cool, maybe Steeds will keep the creature mysterious".  Cut to, two seconds later and we see one the titular creatures. So much for building any kind of tension or suspense.
This movie falls into the category its too bland to be good yet too boring and uninteresting to be so-bad-its-enjoyable. What we are left with is a movie that feels like a slog, filled with cliches, painfully annoying characters and dialogue that is as wooden and awkward as the acting. Seriously, I dont know why writers have to cram their movies with people that are so unlikable or so-one-note. Like, Steed tries to flesh out his characters but it just falls flat. Here's the other thing, I think Steed has a problem with the very well worn but also, very true statement of, you know, sometimes less really is more. 1979's Alien didnt feel the need to throw out an alien in the first few minutes but instead, built the world and characters, then throw them into this situation with the creature. As I said the film opens with a cool little mystery and then it just ruins it almost right away. It's hard to make a good creature feature because it's such a large market but one that is rarely done correctly, because you need to do something interesting and new within the sub-genre but also have the kind of money to pull it off. The film brings an interesting aspect to the table with the setting but doesn't really do anything with it. Also, this film weirdly takes itself far too seriously. Because, if you know you dont have the talent or skill to pull off a movie, why not just take some really big swings and just go for it? If they were having some fun with the genre then it might have made for a more enjoyable watch. If you like blood and gore this movie delivers but honestly the budget for effects is kind of thread bare and it really shows.  Not bad creature designs but the film is a not very fun slog to get through and, at the end of the day a boring creature feature is a carnal sin in filmmaking.
The film looks good, having been a newer digitally shot film. There really isnt the kind of grain you seen in older DVD's so, while no doubt the Blu Ray looks better, this looks just fine. The sound is also good with a healthy track. The film features no features. I kind of would have loved some kind of making of or commentary track just to get a sense of what making this movie was like. It is currently available on DVD and Blu Ray with an embossed slipcover which is actually pretty cool.