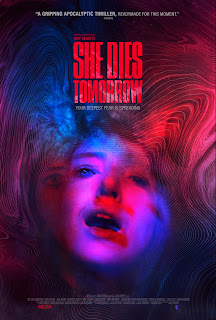 2020's She Dies Tomorrow is probably a good ink-bloat test for both fans and critics. Some might see a deep and thoughtful mediation on life, love and ultimately death while others will see a drab, slowly paced aimless slog. I am in the former camp, though as always im going to keep in real with the films high points and low points.

Before I get into this I just want to note that the director Amy Seimetz who has worked in nearly every facet of filmmaking. That's damn impressive. No matter what you think of this project, you cannot deny that level of hard work to the craft of cinema. Amy (Kate Lyn Shell) thinks shes going to die and when she tells her loved ones it seems to contagious.

I'm assuming this was filmed in a pre-COVID era and its core themes: Isolation, misinformation and fear of death and sickness packed a punch. The film feels like a sledge hammer to the senses, something I was not fully prepared for. With that being said, had this landed in a world without this pandemic I`'ll be honest I'm not sure it would have had the same kind of impact of me. 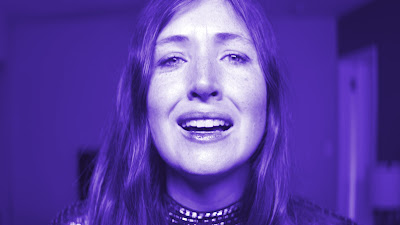 Seimetz creates a moody piece and I can certainly applaud that aspect. Where the film is strongest is that Seimetz lingers on the quiet dread-filled moments. I think Amy was going for an existential nightmare world and in that respect I think it is successful. Using extremely well placed flashbacks we get to know Amy before her doom-spiral. That is incredible important. As someone who suffers from anxiety its easy for an idea to take root and change you. Thats what the core of this movie is for me, destructive change. Unlike most critics, I`m gonna totally truthful- I didn't like this movie on first watch. But, upon my second viewing it clicked with me and in a weird way took me out of my shitty mood. This is odd because the film isn't comforting in the traditional sense yet I felt a wave of peace wash over me at the finale. The other thing that I think helped me like this movie was, much like a Lynch movie, I had to switch off the part of my brain that needed to make total narrative sense. Like, if you really try to figure out what Lost Highway (1997) is about, you are going to hurt yourself. But, if you open yourself up to it being more of a mood piece, a darkly beautiful poetry in cinema form then, I think you`ll start to truly see the worth in this film. After I opened myself up I could really reveal in its arresting and visceral visuals and its jarring jumps in time. Does the film really offer anything new to its core themes? No. That doesn't make it less powerful by any means. If I would say I had a complaint (and yes its OK to see a films flaws but still enjoy it) it would be the film gets a bit repetitive and its hard to connect with the characters. 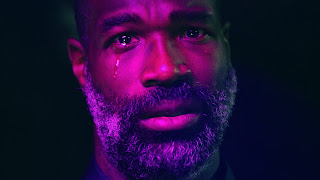 She Dies Tomorrow looks great and I give it credit for being a surreal work of nihilism. Its a horror movie in the purest sense. Meaning, it doesn't lean on the crutch for shock value and gore. Amy Seimetz uses are primeval fear of death and disease against us, but does it in a profound and weirdly cathartic way. Bravo.