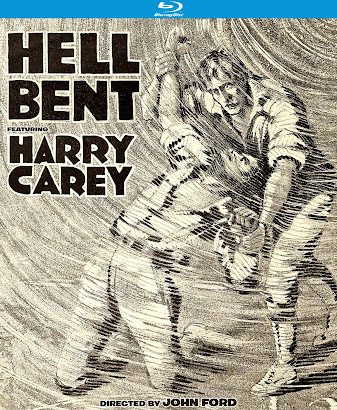 Earlier this year Kino Classics released Straight Shooting (1917), the first feature length film of John Ford's. The film was nearly lost to history but was thankfully re-discovered, re-mastered and re-released for film buff's to enjoy. Ford and Western fan's can rejoice as yet another early Ford film, Hell Bent (1918), is making its way to home video courtesy of Kino Classics.

I think when comparing this film to Ford's debut, Straight Shooting, you can see that the director was up'ing his game as far as a more complex narrative. The way he takes one-off plot elements and weaves them into the grander story is something groundbreaking for early cinema. Ford never misses a chance to grow his characters and expand on the plot that is ever unfolding. It actually has more layers than I thought it would have and I was left very impressed. But, like Shooting, Ford is comfortable staging great action scenes. Even in his earliest work this is something the director was at home with. There is some great set-pieces that are engaging and thrilling to the audience. Again, Ford brings back Cheyenne Harry , his lovable anti-hero played to the hilt by character actor Harry Carry. As I mentioned in my review for Straight Shooting, this idea of an anti-hero was groundbreaking for its time and, Carry himself is said to have inspired the likes of John Wayne. The finale has a real pathos to it and its a real credit to early cinema. Also on display is well thought out and inventive camera work as well as editing.  Overall, a great film that should be considered a must-watch by Western and early cinema buff's in general.

Kino Classics provides a spellbinding 4k restoration that truly brings this film to life. Its been cleaned up but still retails some wear, which comes down to it being over one-hundred years old. Its worth noting that this film was considered lost so, the condition it was in may have not been the best to begin with. I think its a great looking film and, one I think we are lucky to have at all. Production design and actors are come to life with clarity and I'm always amazed at how great these new transfers look. The sound is great as well with no hiss. A new score is provided.

The extras include is a video essay by John expert Tag Gallagher. Gallagher also provided a nice video essay for the Straight Shooter release. A 1970 Archival interview with John Ford conducted by historian ans Ford expert Joseph McBride, makes a lively and interesting addition to this disc. McBride also provides a wealth of knowledge with his feature length commentary. This is a real treat and like his commentary on Straight Shooter, he really digs deep with a trove of great information about Ford, the making of the film as well as its cast. This is a disc that should be missing in a film buff's collection!
Posted by The Video Attic at 2:44 PM