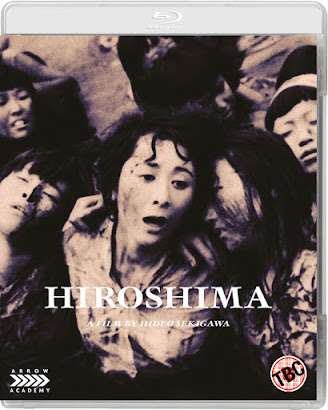 I wont lie Hiroshima was a movie I've been dreading since I chose it for review. But, I think its important not to ignore a dark part of my countries history. It's a film thats important for everybody to watch and reflect on. Nonetheless, I knew it was going to be a depressing film and, I think it makes it worse that we are all going through a pandemic still. I have had it on my pile for a little while and, finally, I decided it was time  to watch it. Eerily the day I chose to watch this happened to be the 75th anniversary of the dropping of the bomb.
The film of course follows pre-post and during the aftermath of the Americans dropping an atomic bomb on the city of Hiroshima. We get a array of points of view from the military, citizens, children and scientists. I will warn you this film is graphic. Do not let the PG rating fool you, though the film features no real blood or gore the broken, burned bodies of men, women and children is graphically depicted. If you are not in the right mind frame for such a movie, especially now, then you might want to hold off on this one. The filmmakers do you sugar coat the devastating aftermath and it makes for a harrowing, sobering and chilling view. It's an extremely well made and worth while watch, though I would be lying if I said I would probably watch it again any time soon. It's I think the credit to the actors that truly bring the heart breaking moments to life. Hollywood films following the bomb never really talked about the horrific impact it had, only that it was a heroic act that ended the war. This film offers the perspective of the other side and its so important to get the full picture. Yes, you`ll feel uncomfortable but thats a good thing.
The transfer of Hiroshima by Arrow is as close to perfect for this film as it probably will ever get. Despite a few artifacts the picture looks flawless. Clearly, Arrow has provided us the best possible picture and I'm sure they sourced this from original elements. The sound is great as well and has no hiss or background distortion.
As with all the Academy movies Hiroshima has a lot of historical features that help put the film into its proper context. Hiroshima Nagasaki Download (72 min) is a feature length documentary about the bombing with interviews with survivors. It's a hard watch but in the end well worth it.
Hiroshima, Cinema and Japan's Nuclear Imagination (33 min) is a video essay by Jasper Sharp. Sharp talks about the history of the tragic bombing and of course, the films that came out as a result. Warning: Much like the documentary, it features graphic photos. I found it very interesting and it makes a perfect companion piece to this film. Rounding out the features is a rare interview with actor Yumeji Tsukioka (6mins)
Posted by The Video Attic at 9:35 AM