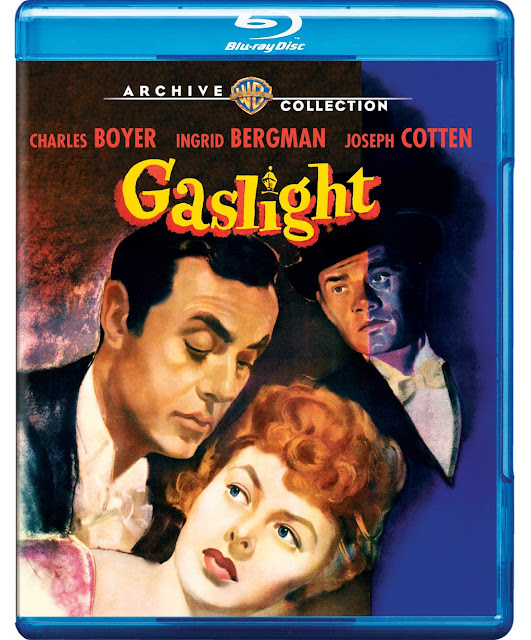 Before Silence of the Lambs (1991), before Psycho (1960) Gaslight from 1944 was an early example of psychological thriller. Sure, its not the earliest, with Gaslight (1940), Cat People (1942) and most likely even earlier examples. Gaslight from George Cukor was however a milestone in the sub-genre and well worth watching. Paula (Ingrid Bergman) returns home years after he aunt was brutally murdered. Meanwhile her new husband Gregory (Charles Boyer) is keeping a closet full of secrets whilst he is slowly turning her insane. The term gaslighitng is a term that is firmly implanted into the lexicon. Because, if you say someone is being gas lit or gas-lighting someone, chances are good without any context of the original play by Patrick Hamilton or the various film adaptations. Thats the kind of impact culturally these films have had on the public's imagination.
So, lets get it straight from jump. This is classic Golden Age Hollywood at its finest. George Cukor is in top form translating this fog drenched melodrama into pure macabre magic. Visually the film is very much what I call Gothic-Noir, taking its roots from period Gothic overwrought melodrama and the Noir movement taken from German Expressionism, with its dark, evocative lighting, long shadows and heightened sense of mood style. This is Jack the Rippers style London, where every street is foggy, and danger could be tucked in every corner. The plot a very engaging mystery that weaves a web of lies, psychological torture and murder. Cukor's direction is pin-point perfect with the way he handles his incredible cast. Couple this with a rich and haunting cinematography by legendary four-time Oscar winner Joseph Ruttenberg (Mrs. Miniver, The Philadelphia Story). And that cast! Ingrid Bergman is lovely but she has the talent to effortlessly pull of the complex and demanding role of Paula. I mean, you cannot help but feel gutted as Boyer's character uses psychological warfare on the poor timid girl. Her range was truly wonderful and this movie proves why she was such a big star. Charles Boyer who plays the suave but truly evil Gregory. He plays the role with subtly when it calls for but even his more over-the-top moments very feel hammy. Joseph Cotton (another Hitchcock alumni) is also pretty great and oozes charm, talent and a bravado that few stars can pull off. Oh, and we get an early film role for the darling Angela Lansbury. She's not in top form but does a good job in the role. May Whitty, probably best known as Mrs. Foy from Hitchcocks underrated classic The Lady Vanishes (1938). In fact, this almost feels like a Hitchcock film that wasnt directed by the master himself. Thats high praise indeed. So, while preparing to re-watch this film I decided to watch the original 1940 version (also included on this disc!) While the film has some merit, its no where as fully formed or richy photographed or directed as its 1944 counterpart. It just goes to highlight how you can take basically the same material and, with the right screenwriter, director and actors, produce something miles better in every way.

Warner Archives transfer is stunning! It's rich in its fine detail and truly shows off Ruttenberg's master cinematography. There is hardly a scratch or artifact to be found and the result is a clean looking print. I've seen this movie before in very shoddy transfer so, finally seeing this soaped and looking its best was a true treat! The sound is also great and has a nice robust track. Music and dialogue comes through clear. The disc is also chocked full of great features ported over from previous editions. For completeness the 1940 version is included. While I didnt like it nearly as much as the '44 version its still a wonderful addition. The 1946 Lux Radio Theatre Broadcast version is also included. And finally, the great lady herself Angela Lansbury talks about her role in Reflections on Gaslight as well as other people connected with the film including Bergmans daughter Pia Lindstrom.
Overall, if you have not seen this film, its a must own. And, if you have the DVD this is well worth upgrading.