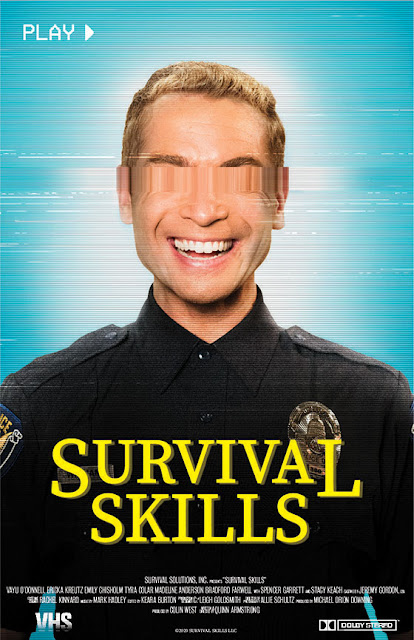 Framed as a 80's era VHS training tape the film narrated by Stacy Keach (known any as The Narrator) introduces us to Jim (Vayu O'Donnell) a bright peppy 'every man' and we go through his year on the police force. The jolly optimistic man soon discovers that his job isnt all its cracked up to be in this savagely funny satire. On the surface Survival Skills is a very basic even thread bare plot -yet, its thanks to Quinn Armstrong's brilliant use of wit and white hot satire that it takes a just OK premise into a darkly funny and harrowing journey. By the end the film had me shook and 'reeling' in the best possible way.  I hate comparing other filmmakers to one another but in this case I couldn't help but feel like Armstrong was channeling the great Quentin Dupieux in terms of the surreal living comfortably right next to the real. Now, admittedly Survival is no where near as insane as a Dupieux outing yet it strikes just the right cord between weird, surreal and the heartbreaking real. 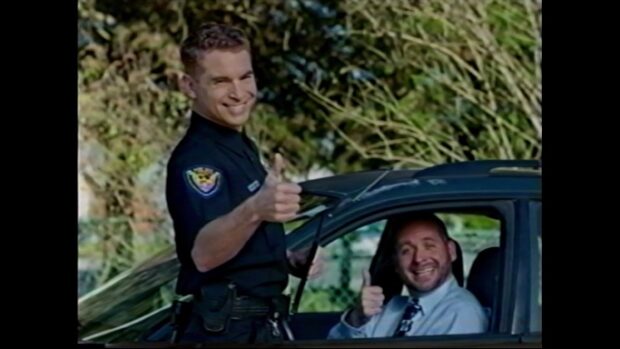 The film uses a lot of fourth wall breaks. Now, I can already hear the groans but, hear me out. Quinn does an amazing job at transcending and even brilliantly incorporating those breaks into the narrative. It's something that is incredible hard to pull off well but damned if he doesn't do it beautifully. I've seen other films attempt this to some degree of success but maybe nothing this polished and evocative.  The scratchy, low-fi VHS quality is sure to make us older film nerds happy yet taking this a step further this too is used in clever ways to highlight important moments. For example, the more wear our hero Jim experiences the more wear on the VHS tape there is.Not to mention some very jarring scratching screeching sounds bridging some scenes.  That my friends is fucking brilliant. Using chapters ala a training video is a cool and interesting way of highlighting important narrative points and I haven't seen that done before. There is even a  hilariously sitcom segment involving Jim and his Dad (R. Hamilton Wright). Another example includes Jim's girlfriend in her 50's era typical 'have a good day routine' yet the camera lingers on her after the 'bit' is over and suddenly we see her almost robot-like not sure what to do when he's not on screen. It's funny on a surface level yet also has some sinister undertones in the meta-text of the scene. That's the kind of playfulness this film takes advantage of and its really makes for a wholly wild and interesting watch.

I love when a movie surprises this jaded critic and stuff like that deserves all of our praise. It's almost kind of hard to write a review for a film that just needs to be seen to be believed (and yes I know how corny and cliched that sounds) but its true. This is a comedy first and foremost  but Quinn doesn't spare us on the bleak, depressing and harrowing aspects of Jim's job. It's not easy to balance comedy and dark subject matter yet thanks to a well structured and smartly written screenplay the two tones work in harmony. Besides a great script what really sells this film and its somewhats subtle sometimes not so subtle subtext is the actors. Stacy Keach, beloved cult star is so damned amazing in this (and really anything he does) and he brings the right amount of hammy and hard boiled to the role. Its a joy, no, a honor to watch such artistry at work. Seriously, you have to be dead inside not to get excited when you see this gentlemen on screen. Playing our smiley peppy hero Jim is Vayu O'Donnell. O'Donnell brings a quiet dread, sympathetic, harrowing and above all funny performance. Like Keach, he knows the line between over-the-top and never actually skirts it, yet comes deliciously close. At the end my heart really bled for this character. Honestly, I could go on and on because everybody is so fantastic in this film.

On paper this shouldn't work but it does. You have a genius script brought to life by its performers. This is even more incredible when you take a step back and realize that this is Quinn Armstrong's first feature, having previously worked on shorts (including a short based on this feature). The fact that this filmmaker already has these kinds of skills behind the camera makes me think, look out this filmmaker is going places.

A darkly brilliant take down of Reagan era police-force that sticks with you long after its over.