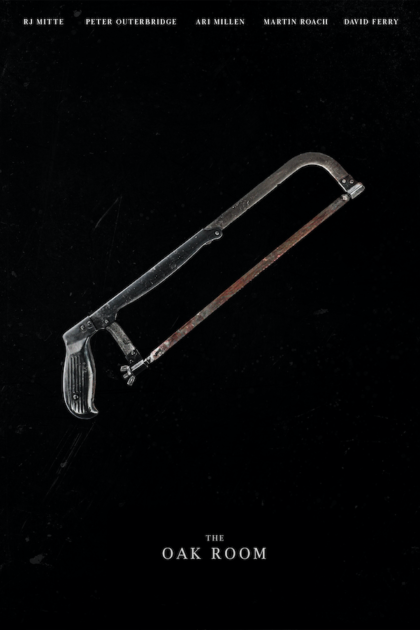 Cody Calahan's The Oak Room is one of those movies that is kind of hard to define genre wise. Surface level its a thriller but, at least, thats the way the trailer markets it is. However, I'd say its a subtle, creepy haunting family drama that is quietly invaded by a thriller. A raging snowstorm brings Steve (RJ Mitte) into a bar at closing time. The owner Paul (Peter Outerbridge) is shall we say not too happy to see him. You see, it seems that Steve owes Paul and other people money, but more personally the grizzled bar tender hated the way Steve wasn't there for his estranged father. What ensues is a night of stories, mistaken identity and murder.

After the credits rolled on The Oak Room I felt like I was sucker-punched right in the gut. I just sat there for a little while still thinking about what I just watched and letting it all sink in. This feeling wasn't so much because the film was gory or partially intense for that matter. No, it was the extreme  melancholic tone that did it. Filtered through this cold, bleak backdrop the film's core is about father and son relationships and, without going into detail the fact that it centered on a son estranged from his father was painfully relatable. The Oak Room opens up like a typical thriller with a stranger in a ski mask coming into a bar on a dark snowy night. But from expectations are subverted to my delight and probably others groans.

What plays out is a very uncomfortable and at times tense drama and its clear the filmmakers were going for something darker, more unsettling. The core themes I think work because they are ones many people can connect with on different levels. This is one of those movies that demands and rewards your strict attention. Even having said that a second viewing might be needed. As for satisfying story telling goes it could have used some improvements. While I applaud the film for going for more gut wrenching emotions rather than a typical crime-thriller I still think some plot points could have been better presented.  Real talk I can see some people, especially more mainstream or casual viewers not enjoying this film. It's a slow burn of a film even for its brisk runtime of under 90 minutes and, as I said its not what you`d call a traditional narrative wise. The ending will also split people but damn if I didnt think it was brilliant. One element that I think truly ties this film together is its cast. RJ Mitte of Breaking Bad fame is outstanding! He brings layers to the character, swaying from smart-ass and cocky to sympathetic to kind of creepy. Playing Paul the bartender is Peter Outerbridge. Like Mitte Outerbridge gives a layered and realistic performance that is subtle yet effective. The two play off each other incredibly well. But, let me be clear everybody is fantastic in this film and each performer brings this story and place to life. The entire film is this dread-filled, depressed film that is as icy and brutal as its locale. Its' a movie that works on a cerebral, emotional level rather than a paint-by-number crime film. And, frankly any movie that leaves me kind of raw and still thinking about it long after the credits roll is a damn worth while film.

A soul-crushing and engrossing film that will stick with you long after its over.