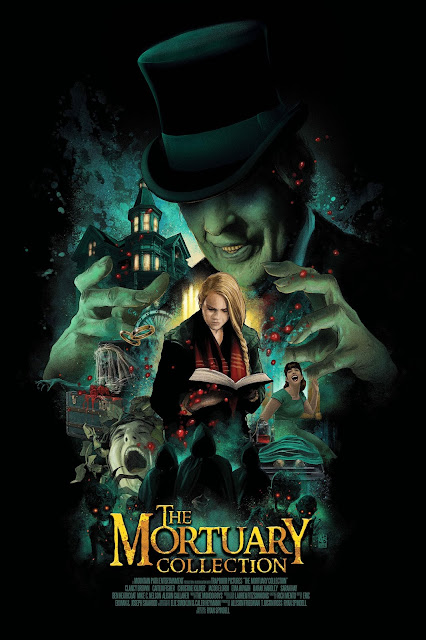 1982's Creepshow was a blood-soaked love-letter to E.C Comics which perfectly blended the macabre, the funny and the gross out. You had talents like Stephen King and George A. Romero at the height of their creativity along with an incredible cast. Add the brilliant effects wizardry of Tom Savini and score by John Harrison and you have a milestone in the genre. For better or worse all other horror anthologies will be compared to it but none have ever dethroned it in terms of quality and talent. But, some have come damn close, like Michael Dougherty's Trick r' Treat (2007) and, now you can add The Mortuary Collection (2019) to that list. Now, maybe that sounds like a back handed compliment but far from it. I think that being close to the brilliance of Creepshow in the horror anthology terms is high-praise. Let me put in plainer. Holy crap, this movie is genius and I do not say such things lightly. 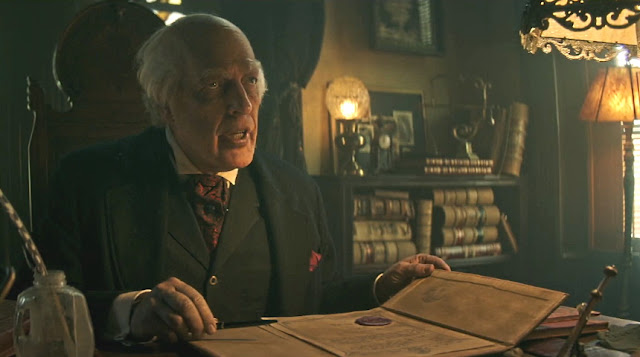 The thing is there are a lot of horror anthologies being made and while some have interesting or even brilliant shorts, but rarely do they ever deliver in terms of an entire cohesive and well made collection. This one delivers the goods and more. A young girl named Sam (Caitlin Custer) interviews for the job at a mortuary run by a sinister looking man named Montgomery Black (Clancy Brown). He regales her with tales of how some of his 'clients' have departed. Mortuary first few minutes are breathtaking. We first get a booming voice-over of Black, cut to a book with the film title, and, having opened it we are propelled into this delightfully spooky world that made me long for crisp fall days, cider, and of course, Halloween. Though the subject matter of the stories are dark Ryan Spindell wisely injects humor into the film and thus things never get too-bleak. Amazingly it keeps a consistent tone throughout the four stories not to mention features maybe one of thee best wrap-around segments in any horror anthology, Creepshow included. I also loved that each story takes place in a different decade (between 50s-80's).  The attention to detail is incredible, but also the film doesn't scream down your throat that this is a period horror film. Its grounded in reality but somehow also surreal and off kilter-ed at the same time. I will say that going in you always expect a few duds in a horror anthology but honestly, not a bad one in the bunch. All the stories zing of smart and mature writing mixed with just enough subversion and wit to keep me invested. The first segment (by far the shortest) is a fun sick Lovecraft inspired outing and the perfect morsel before the main courses. Speaking of, no doubt Ryan was inspired by the likes of Poe and Lovecraft with the themes of tragic love, madness, mutant spawn but I also felt some modern influences like Cronenberg body-horror and Raimi's splatter-y-physical humor. The entire film has a consistent theme of stories and this is a brilliant and simple way to neatly tie the everything together. Again, having this made every part of the film feel like one cohesive work instead of just short films loosely strung together.

I would be remiss if I didn't talk about the acting. Cloaked in black with a voice like moldy velvet Clancy Brown is deliciously wicked as Montgomery Black. Brown knows exactly how far to take the character and clearly he is having a wicked good time in the role. Seriously, its like the perfect cross-between Angus Scrimm's larger than life turn as The Tall Man expertly merged with the Creeper ripped straight out of an old E.C comic book. Fantastic! It was truly a joy to see his time on screen. Caitlin Custer is also great and its a credit to her talens that she is able to hold her own against Clancy. Like Brown she finds a sweet spot in being subtle when its called for it but also a little over-the-top. I could go on and on though, as all the actors deliver top notch performances without a sour note to be found. Visually the film is sublime with so much attention to detail in terms of composition, framing, camera work and movement. The look and feel so damn close to a Charles Addams cartoon came to life. I watched this twice and I was still picking up on small details. The film looks like every penny went onto the screen and the end result is a slick looking thrill ride. I can now add The Mortuary Collection as another Must-Watch during the Halloween season and well any old time!