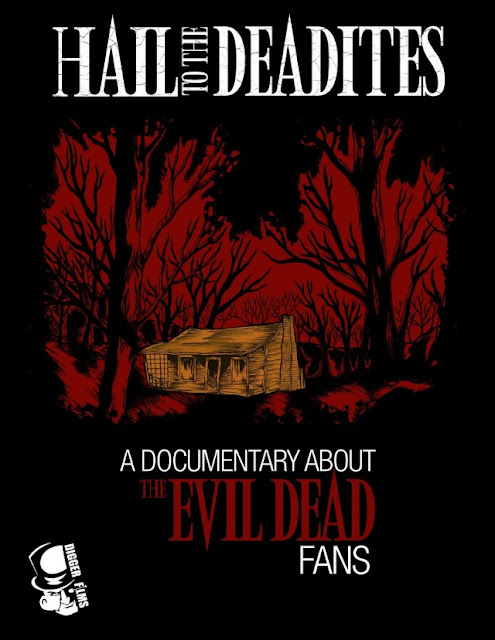 Like many horror fans The Evil Dead and its sequels was a massive window into the genre. It, along with Re-Animator (1985) and Dead-Alive (1992) were turning points in my film education. Needless to say, there have been a lot of documentaries covering all three Evil Dead films, with every major actor and creative outlet being interviewed countless times. So, I was curious what, if anything new Steve Villeneuve's Hail to the Deadites could bring to the discourse.  What makes Hail stand out is that it talks exclusively about the fandom of The Evil Dead series and why it's, like the deadites themselves, never seem to die. So, yeah I might have let out a groan or two, because, while I adore the Evil Dead series (especially the first two) as I said it's been covered to death. Having said that, damned if Steve didn't have me smiling from the very first few minutes and by the end cheering by the finale. With a sea of click-bait negativity online it's great to see the gleeful horror fandom side. And, it just so happens that Villeneuve clear knows how to make a documentary that flows well and its nicely paced, well edited with very lively and down right fun interview subjects. We have a 'splattering' of the Evil Dead cast like Bruce Campbell, Ted Raimi, Betsy Baker (and so on), genre heavies like Chris Alexander, John Fallon and Michael Felsher as well as super-fans. And, its featuring these super-fans that the movie truly finds its heart. The excitement and joy just radiates off these people and it really makes you wanna watch all the films right afterwards, and, I couldn't help but recall the impact these films had on me as a young horror nerd. I always get a kick out of seeing people's cherished props and collectibles as I do that as well.The neat thing is the film is inter-cut with some incredible fan made films, music and art which, again, makes for a much more interesting watch. It's such a cool way to showcase creative artist work while also perfectly tying into the theme of fandom. While the film is light and fun there was one heartbreaking story told by a local DJ named AC McCray. Seriously, it moved me incredible and I think it was a great thing to share in this documentary. If i had to lobby maybe a criticism I would say even at a lean 80 minutes it felt like it could have used a slight trim. I went into this film with reservations but came out of it cheering and if you are even a casual fan, or, like me a die hard one this is very much worth checking out.

Groovy! A well made film with heart and humor in an age of cynicism. A Must See!