I've been a fan of Adam's ever since his pull-no-punches, psychological skull fucking of a film called The Bunny Game (2011) was unleashed onto its audience.. While the film was far from perfect it had something raw, exciting and engrossing about it. I think I knew at this point Rehmeir was a director that, given the breaks had the talent to go places in this business. Since that point I've been in touch with the director and I am happy to see his latest film was apart of this years Fantasia Fest. The film tells the story of a punk-rock singer and pyromaniac named Simon (Kyle Gallner) who happens to meet the shy mousy Patty (Emily Skeggs). The two find a connection despite seemingly being complete opposites.

Holy shit. Right from the very first frame Adam's film has a high-energy lunacy that is somehow both grounded in reality yet had a totally off-kilter-ed surreal quality. This alone had me hooked yet the film has a great deal of heart and charm. At its core Dinner in America is a love story but doesn't fall on sappy troupes nor does it feel like its not authentic to its beating heart punk-roots. Wisely, Rehmeir keeps a consistent tone of strange and at times intense but never too-dark or depressing. In my opinion it hits just the right note and damned if I didn't find myself rooting for these two lovable misfits.  The writing is incredible witty, fun and thankfully never goes fully off the rails even though it delightfully skits the line more than a few times. Think of the film as a cross between the painful awkwardness and hilarity of Welcome to the Dollhouse (1995) and the strange and quirkiness of Ghost World (2001) (also with Pat Healy) all laced up with studded black leather. 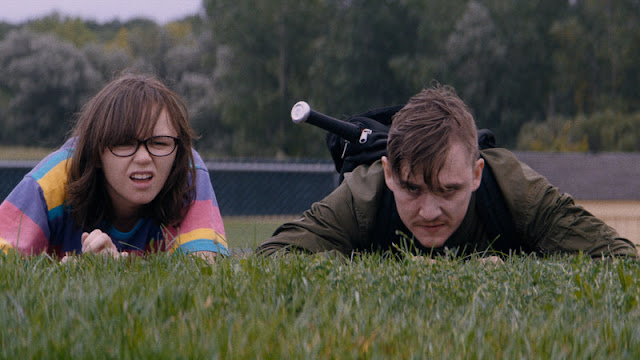 What I think really makes this material sing though is the outstanding cast. I cannot say enough about how much Kyle Gallner and Emily Skeggs crushes their respective roles. Gallner has a bravado that is James Dean, had Dean been a drug-fueled punker with a flare for setting things on fire. He oozes a kind of charm that perfectly accents his bad-ass take-no-shit persona. I believed every bit of his character and damned if he never took it too over-the-top where other lesser actors might. Then you have Emily Skeggs. Again, just  wow. Her turn as Patty is so layered. She's awkward, painfully shy, strange but also I found her incredibly real and very relatable. Not to mention she takes some brave swings that pays off. Her character has the most satisfying arc in the film and, like Kyle, never takes the character into caricature territory. The pair have chemistry and both play off each other so well. It never feels like one is trying to upstage the other. I'm not being hyperbolic when I say I can see both of Kyle Gallner and Emily Skeggs winning Oscars someday. This for me is what I consider star making roles and I hope Hollywood stands up and takes notice!  And, the supporting cast in also fantastic with Pat Healy (Ghost World), Lena Drake (Its Always Sunny in Philadelphia) and Griffin Gluck (American Vandal) and 80's icon Lea Thompson (Back to the Future) all giving wonderful performances.

I would also be remiss if I didn't mention that this film looks amazing thanks to DP Jean-Philippe Bernier. Bernier has already shot modern classics like Turbo Kid (2015) and Summer of 84 (2018), and choke this up to another great film for the resume.  Couple this with some excellent editing and music by John Swihart (How I Met Your Mother) and you have a great little film.

Dinner in America is a deliciously twisted and funny take-down of suburban life.