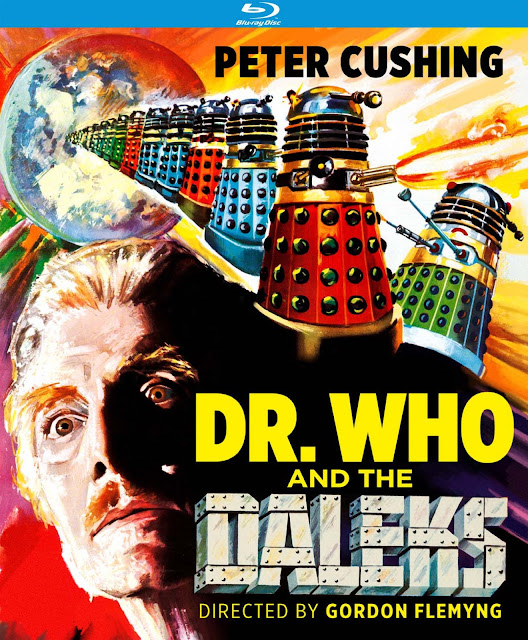 So, confession time. Whilst I enjoy the newer television incarnation of Dr. Who I have not actually seen a lot of the older seasons (or series as they are known in England), nor am I that knowledgeable in the rich backstory and lore contained within. But how could I couldn't resist seeing the famous Doctor played by Cushing in all its Technicolor glory. Join Dr. Who (Peter Cushing) the iconic adventurer and Barbara (Jennie Linden), Susan (Roberta Tovey) and Ian (Roy Castle) as they travels through time, explore an alien world where they come in contact with the famous robot menaces the dreaded daleks. Now they must outwit them with the aid of a alien tribe known as Thals. I wasn't sure really what to expect but, wow, this is a really wild and pretty enjoyable movie. Sure it has its share of issues from the shoddy sets, hammy acting (even the great Cushing though he tries his best), and a shall we say interesting plot.

Once you can get over its surface flaws I really think its an enjoyable, trippy and breezy little romp. Its exactly the kind of movie you put on to just shut off your brain and let its hooky goodness wash over you in a blissful wave. Its clear that the director wanted to open up the black and white television series by adding color and boy, oh boy, does it pop. Its so in your face at times its nearly psychedelic. I am told that this version of Doctor Who re-tools certain characters and story elements but I actually found it a nice way to dip my toes into old-school Who. Cushing is a large part of what makes this film work for me. As I mentioned above he is kind of hammy in his delivery but the actor always had a dazzling presents that is hard not to love. Cushing sells the character and while I'm sure he is not the most beloved Doctor in the history of the franchise I enjoyed his interpretation a lot. Despite a low budget and a just so-so plot the film has a ton of charms that only a mid 60's British sci-fi could provide. I freely admit I'm not the most knowledgeable Who fan but I still found it a cheesy good watch.

Picture/Sound: Wow. That is what pops into my mind when I look at this new 2k transfer. This is a very colorful film and the new print really brings everything to vivid life. Skin tones are well balanced and look natural. There is a great clarity to the overall film with artifacts and scratches digitally scrubbed. It's also great to see the way-out production design in all its 2k glory. The sound is great as well with a nice 2.0 track. Dialogue comes through strong with no background hiss or distortion.

For Doctor Who fans, this disc is loaded with some great features. First off we have a feature length commentary from legendary British genre historian Kim Newman, historian Robert Shearman and Actor,writer, filmmaker Mark Gatiss. The commentary made for a fun listen, especially someone who is very new to old-school Who.

Dalekamania: A 57 minute documentary about the famous Dr.Who baddies and their cultural impact that they've had. It was really enjoyable and like the commentary added some great history/context. I believe this was ported over form an older Anchor Bay release from the mid-late '90's (I could be mistaken). In any case its a wonderful addition and it was great to see this included.

Restoring Dr. Who and the Daleks: This 8 minute long featurette explores the huge undertaking and hard work that went into providing the stunning 2k transfer. I love features like this because its important to remember the kind of blood sweat and tears it takes to make these films looking their best.

If you are a Doctor Who fan and completest, while Kino Studio Classics has got you COVERED! Not only does the film look amazing but they cram this disc with some excellent features. They have also released the Cushing follow-up film Daleks Invasion Earth 2150 A.D (1966) which I will be also reviewing.