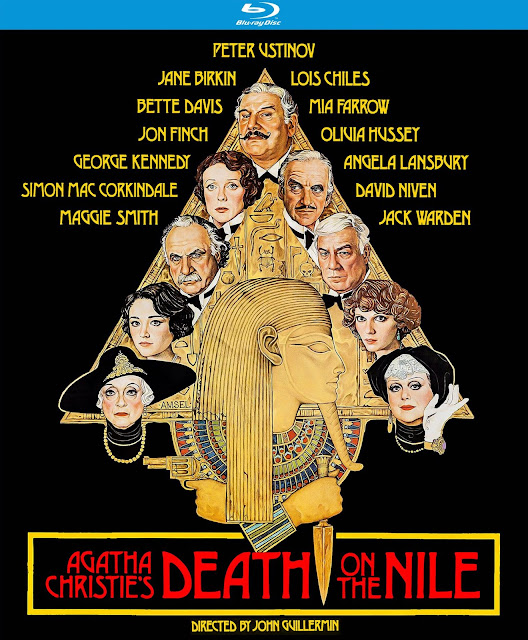 With the big budget remake of Death on the Nile coming out next year (hopefully), it seems very fitting to talk about the original film version from 1978, which of course was adapted from Agatha Christie book first published in the UK in 1937 and a year later in the US. Now, I have not read this book so I wont be making any comparisons between book and film and will be strictly reviewing the film. During a luxury trip, an heiress is killed, with everybody seemingly having a motive for the crime. Now, its up to the legendary detective Hercule Poirot (Peter Ustinov) to discover who the murder is. This is the second of four, star studded murder mystery. And, it is excellent. First off lets talk about the cast. Holy crap its amazing! You have old Hollywood stars like Bette Davis and David Niven sharing the screen with rising stars like Mia Farrow and Jon Finch, and character actors like George Kennedy and Angela Lansbury. Then you have Maggie Smith playing a queer coded character, a very bold move for the time. All the actors some how find a way of sharing the screen, each bring something exciting and thanks to director Guillermin's they all feel like they are on the same page. Even the more hammy performances feel suited to the world crafted by the filmmakers.

Nile of course has a huge scope. The film takes place during the '20's and we get a lush, lavish and detailed production design that feels suited to the time period. Not to mention the amazing locales that are so breathtakingly shot by the legendary cinematographer Jack Cardiff (The Red Shoes, The African Queen). Screenwriter Anthony Shaffer was a true genius in his field, having turned out classics like Frenzy (1972) for Hitchcock, Sleuth (1972) and The Wicker Man (1973). Here he adds a layered, darkly satirical, funny outing, which is filled with dialogue that crackles with the kind of wit and brilliance of Golden Age Hollywood with the more boundary pushing freedom of the '70's. Mix this with thrills, twists and turns with some generally satisfying moments and you have a hell of an enjoyable ride.  If you liked Knives Out (2019) you should make this a must watch.

The 4k transfer just dazzles! As I said the film has a big scope with some wonderful locale's and rich production design and this new transfer celebrates that. Seriously, its just awe-inspiring and I think its safe to say that the film has never looked this good. The sound is great with a well balanced track and dialogue comes through crisp and clear. The disc features some nice features.

Making of Death on the Nile: This vintage featurette includes rare interviews with the cast and crew shot during production. Its always fun to see these vintage feature's especially seeing the interviews being conducted with actors still in costume.

Like The Mirror Crack'd (1980) this disc features the a wonderful and lively commentary,with Steve Mitchell, Nathan Thompson and Howard S. Berger. The trio are really fun, informative and and I really enjoyed every minute of it. Commentaries are my favorite features, but some can be a slog. When you get these brilliant scholars together, you know your in for a good time! They are chocked full of great information and I enjoyed it alot.