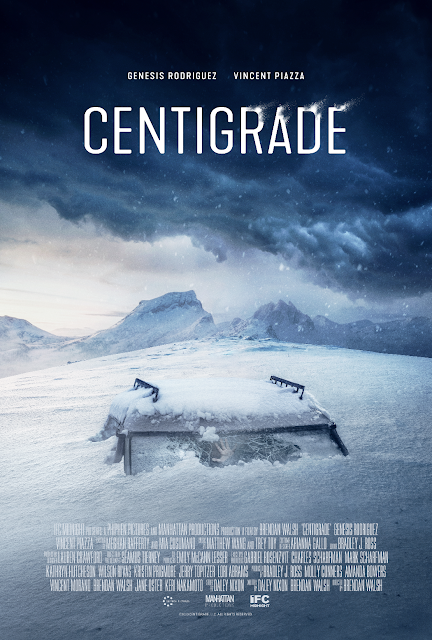 Based on a harrowing true story, author Naomi (Genesis Rodriguez) and her husband Matt (Vincent Piazza) who get trapped in a snow bank with very little in the way of food or water. Now they must survive in the harsh cold. Making matters worse Naomi is pregnant. 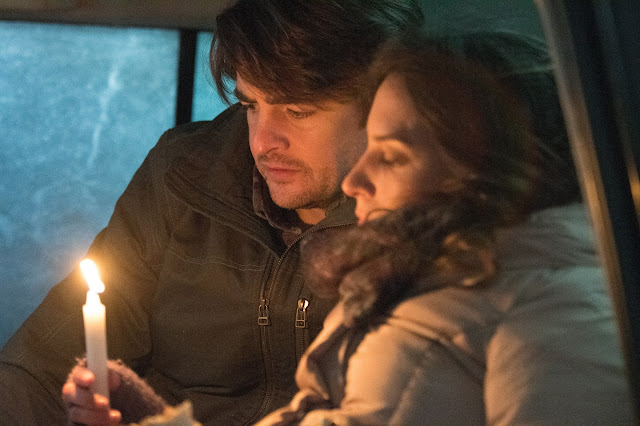 On paper Centigrade seems like it should work as a white-knuckle, gut-wrenching story of the limits a human will go to survive given some incredible odds. But, like its name sake Centigrade actually left me feeling very cold. Okay, yes, I know this is based on true events but the film strains in explaining how someone survives nearly a month with very little in the way of rations and worse yet strains to make the entire run-time not feel repetitive or cliched. There is only so many times you can see the couple chipping away at now or fighting. It get's pretty dull after awhile and I think a film of this type should be anything but boring. Things to seem to pick up when the baby is born and for at least a little while things get interesting, then once again they fall into repetition. Walsh boldly starts the action right after the big storm has trapped the couple (because, honestly who falls asleep during a blizzard in a country foreign to them?) but I think that this is a big disservice to the film. It's hard to really root or even care for characters that we know virtually nothing about. Some nicely placed flashbacks would have helped break up the repetitiveness whilst also providing some much needed backstory. It's why I think it was so hard to fully connect with either person and it just left me not caring that much. Also, its baffling how a movie that would seem to have built-in high stakes has very little tension or suspense. There are a few moments when you think that help is coming but they do this so early in the film that you know that no rescue is coming. And even if you think they are close to getting out, you know damn well they arent because if they did the film would be over. This is a case where I think this would have made a better short film that was lean and tense and brisk. Yet Walsh (known thus far for episodic work) stretches it out to feature length. I will say that there are some pretty interesting and harrowing moments that kept the movie at least watchable. It also helps that our two leads Vincent Piazza and Genesis Rodriguez do a great job at their respective roles. The limiting camera work also helps to keep things claustrophobic and always slightly on edge.

This is Branden Walsh's first feature film debut and I'm sorry to say it fails to connect on a human level or work as a purely tense filled thriller. Thankfully though it has some solid acting and a few gut-punch emotional scenes that helps but sadly doesn't save this film. Centigrade feels like a movie that should have wowed but instead  its chilly and detached.