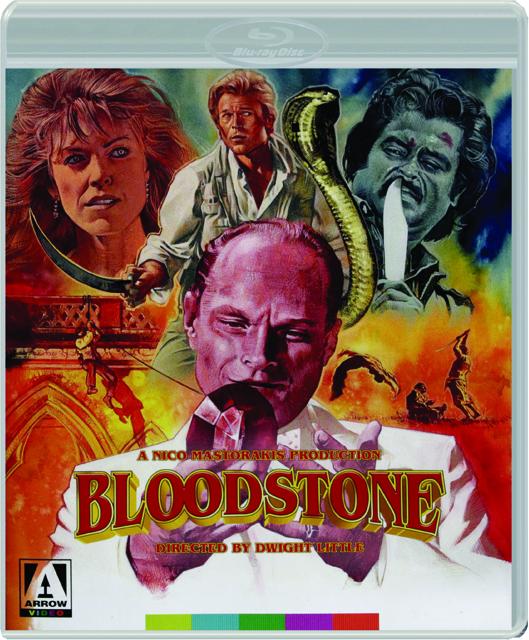 An American couple go on what is suppose to be a relaxing honeymoon in India. However, they soon find they are mixed up in an adventure and intrigue involving a legendary and valuable stone artifact called the bloodstone. Bloodstone (1988) is a knock-off of the highly successful Romancing the Stone (1984) which, was a rip-off of the popular Indiana Jones series.

Horror fans will know Dwight Little for Halloween 4: The Return of Michael Myers (1988), but the director has worked in many different genres. Bloodstone is basically what you`d expect, namely a c-grade Jones knockoff. The film is cheesy and filled with plot holes, bad dialogue, plot conveniences and hammy acting. Having said that, I think Little knows exactly the kind of film he's making and he has fun with it. The fact that this film doesn't take itself very seriously is what I think saves it. In this respect the cheesy dialogue and the well worn troupes actually works with the film instead of against it.  It's adventure-schlock and everyone including the cast is very much in on its own joke. I will give the film credit for some decent action set pieces and the pace moves briskly. Aspects of the film have not aged well, with some very cringe-worthy Indian stereotypes. You could make the point that the entire set up is handled with, shall we say, not a lot of tact.  This is very unfortunate and while I do not condone it, it doeskin ruin it for me. But, I certainly can see it leaving a bad taste in your mouth. Least we forget a lot of the Indiana Jones movies also delivered some not very PC depictions of other races and cultures. Again, im not excusing it and I totally understand if thats enough to make it turn it off.

As far as late '80's action/adventure titles its a decent little film. It's cringe-worthy, hammy and not the best but it knows what it is and leans into its own silliness. Bloodstone is a harmless albeit misguided film but fun enough for a Saturday afternoon on a rainy day kinda watch.

The transfer is great. Colors look well balanced with skin tones looking natural and not washed out. I found very little film artifacts or grain issues as well. This is a very colorful film and I thought that this new print really makes things pop and come to life. The sound is also great with a robust 5.1 mix. This being an action film the sound effects/design and score are nicely balanced and come through clear. Same with the dialogue.

The film spots an array of great features. We get not one but two feature length commentaries. First, we get a director commentary with Dwlight Little. The second is film journalist and author  Bryan Reeseman. Both commentaries offer some great information and some very amusing antidotes.

Keeping it to Myself: Interview with producer/co-writer Nico Mastorakis (28 mins)

Roudning out the features is Trailers and an Image Gallery.

Overall, a fun movie that looks and sounds great and of course features a nice array of supplemental material.