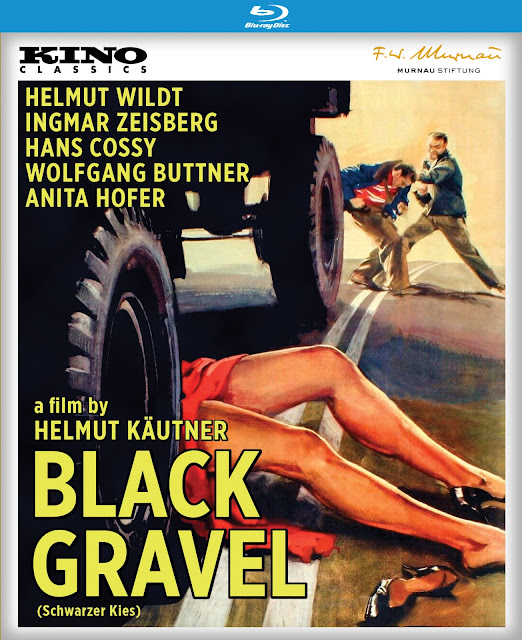 Black Gravel from 1961 marks the the US HD premier of German director Helmut Kautner from Kino Classics. And, oh boy did they pick a hell of a film to start with. Black Gravel tells the story of a post-World War II Germany, more specifically a little village by an Air Base. The little town has been thrown into vice and black market dealings as well as shortages of vitals like housing, water and food. Robert (Helmut Wildt) is a sleazy young man that deals in black market gravel and other shady things. One night he accidentally runs over a young couple and things get even worse as he avoids detection.  Mixed up in all of this is Roberts old flame Inge (Ingmar Zeisberg).

Bleak, gritty and a challenging watch. Kautner film pulls zero-punches in its deeply cynical view-point of post World War II life in Germany, focusing its lens on the dens of vice and corruption that ran wild after the war was over. I say its a challenging watch because its a very depressing and at times uncomfortable watch. But, at times feels like a slog to get through the nearly two hours of nihilism. And, our only viewpoint character is Robert, a pretty disgusting person. Helmut wants us to feel some sympathy for him but it's a pretty tough sell. Gravel, would have been better suited as a tight thriller but, sadly never builds the same kind of tension that something like The Wages of Fear (1953) does. Though I will say the film is amazingly well shot with incredible camera work and a style that is rooted in Noir German expressionism and features some amazing lighting cues. For example, scenes in a smokey hazy bar scenes really captures this seedy underworld perfectly and you can almost smell the cigarettes, beer and sweat. The beautiful visual flare is an interesting juxtaposition from a movie that is soul-crushing and languishes a pool of murder, regret and sadness. The film itself came under fire for some anti-Jewish scenes but the director argued that the film was not intended as a antisemitic piece (more on that later). Having that said the offending scene of a man in a bar being called a anti-Jewish slur, then moments later finding out he was a Holocaust survivor is deeply uncomfortable, yet also very out of place.  I think a lot of talent went into making Black Gravel from a technical standpoint, yet I feel like the story isn't as developed as it could have been and its frankly a bit of a choir to get through if I'm being completely honest.

The film came under fire of its supposed antisemitic message, yet the director denies that that was his intention. It had been cut slightly with a few new scenes added. Kino Classics features both the original unedited transfer stunningly remastered as well as the Distributor Cut for completion sake. This is the extra mile that is why i LOVE Kino. Both editions look amazing with very little to no dirt, scratches or artifacts. As I said the film wasn't my cup of tea but it was visually breathtaking and this new transfer highlights that. The sound is also great with a healthy audio-track. Dialogue comes through clear as does the sound design. The film features a commentary by historian Olaf Moller. It's a very well done track that features a lot of historian context that is important when watching this film.