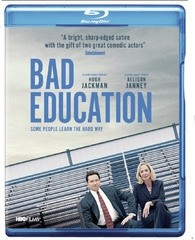 Based on a true story of a real life of a well respected and well loved superintended Frank (Hugh Jackson) and the scandal that shook his community. Cory Finlay was certainly an interesting choice to helm this HBO film having only directed one other feature, the darkly funny satirical Thoroughbreds (2017), which I consider a great film. No one that would predict he would get something more mainstream, yet maybe its not that weird of a choice. After all Bad Education and Thoroughbreds delves head first into a bleak character studies but also injects a nice balance of humor. Both just so happen to be well crafted and engaging films. What can I say expect that I was engrossed from the very first minutes of the film and it hooked me until the very end. The screenplay by Mike Makowsky is extremely well written with dialogue that feels natural and real but also crackles. It's fast pace and tight structure makes the run time just fly by. What could have easily been a boring by-the-numbers story about embezzlement is wisely framed into a complex character piece. Its so interesting to see the well oiled machine that is Frank Tassone come so completely undone by his own greed. Having the focus be as much on the characters as the scandal itself is such a stroke of genius. Hugh Jackman and Allison Janney both take the already brilliant screenplay and bring it to life. Jackman is able to shed his rough Logan exterior for the buttoned up suit wearing Frank and with it brings depth to the role. Seriously, if you forgotten how wonderful he is at acting this should re-confirm that. And, as good as Jackman is its Janney who steals the show. This might just  be her best performance in a resume filled with great roles. And bringing these two actors together in a scene is like capturing lighting in a bottle. Seeing two talents at the height of their respective careers working along side each other is a marvel to behold. Neither one tries to dominate the scene and both play off each other extremely well. New comer Geraldine Viswanathan also is great and can hold her own against this superb cast. It wouldn't shock me if she won an Oscar of her own someday. This movie succeeds because of its sharp writing and Oscar worthy performances.
The film looks great in HD especially considering it was shot on newer high-def equipment. The great cinematography and use of sometimes harsh over-lighting is highlighted in this transfer. Skin tones look natural and things dont look blown out in terms of over lighting. The sound is great as well with dialogue coming through crystal clear.  We get three mini featurettes recorded virtually during COVID.

Based on A True Story: This three minute featurette explores the real life event that inspired the film. Shot virtually we hear from the director, writer and actors on the real life scandal.

The Perception of Perfection: A three minute long featurette that talks about the inner-workings of Frank and his character. Again, its interesting to hear from the filmmakers and cast. Finlay gives us some very interesting scene specifics that I enjoyed.

All three are short, sweet and to the point, and, all offer a nice insight into the film, its backstory and the production.